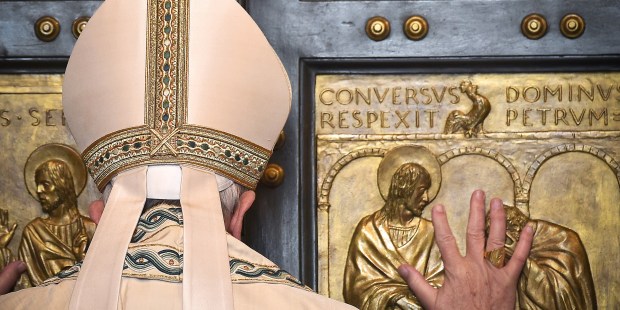 Aesthetics matter, but they’re not the only criteria for this evaluation

Summer readers love lists, and travelers love rankings, so after 10 million plus pilgrims to Rome for the Jubilee Year of Mercy, maybe it’s time to “rate” Rome’s Holy Doors. Not an exhaustive, worldwide list, of course, since Pope Francis has encouraged each of the 3,127 dioceses worldwide along with the major shrines to designate their own Holy Doors, so a complete list would take until the closing of the Jubilee on Nov 20, 2016.

Rome, however, has an overabundance of graces (we get Pope Francis, the Sistine chapel and gelato), so we also abound in Holy Doors: four holy doors in the papal basilicas, plus four doors of mercy and one door of charity!

First and foremost, Holy Doors are a symbol of God’s openness and desire to forgive, waiting with open door and open arms like the father of the prodigal son. In the Papal Bull Misericordus Vultus that proclaimed this Jubilee, Pope Francis wrote: “the Holy Door will become a Door of Mercy through which anyone who enters will experience the love of God who consoles, pardons, and instills hope.”(MV3)

The four doors of the papal basilicas are bricked up when not in use, and the old rite of the opening of the doors used to involve hammering the doors to break them down. (After a near miss in 1974 with Pope Paul VI, that practice has been discontinued).

More to read: When is a door not a door? When it’s a Holy Door!

For this author, the doors are reminiscent of the scene in the TV series “Happy Days” when Fonzie had to admit he was wrong, but could not get the words past his lips. The walled up Holy Door seems to me to symbolize the barrier between our pride and our contrition.

But enough! Let’s run down our Holy Doors! For brevity’s sake we’re going to look at the papal fab four, but the year isn’t over yet! Of course aesthetics matter (this is Italy) but mostly information, welcoming spirit, and — to quote the Council of Trent — “stimulus towards piety” are the criteria for this Holy Door evaluation.

4) St John Lateran – it may be the oldest Holy Door, and the cathedral of Rome to boot, but if it weren’t for the tireless jubilee volunteers standing outside, it would be hard to distinguish. There is a little trim of plastic flowers, perhaps better suited to a roadside gelato stand, and a couple of potted plants for adornment. Pilgrims seem perplexed about what to do because there are no signs to explain the conditions for indulgence, nor texts of helpful prayers to solemnize this occasion. Besides the fact that the bronze doors by Floriano Bondini will never be mistaken for Ghiberti’s “gates of paradise” in Florence, the first thing the pilgrim encounters upon entering is a wooden barrier – not exactly the most suitable symbol of mercy.

On the other hand, there are plenty of confessors available, loads of places to pray, and as soon as you pass the barrier you have Giotto’s fresco of the first Jubilee year in history declared by Boniface VIII in 1300.

3) St Mary Major –  St Mary Major’s Holy Door has no decoration at all ( there might be a fern), but it does have a big sign saying “Porta Santa” so you can’t miss it. It is to the left instead of the right—unlike the other basilicas—and the closed gate immediately in front of it makes it hard to arrange any kind of dignified procession through the door. Again the information is sparse, although the volunteers are always happy to help. The doors themselves are a triumph of Marian “girl power” past and present – one side shows Mary declared “Mother of God” in the 5th century and the other shows Mary pronounced “Mother of the Church” at the Second Vatican Council in the 20th. One walks into the church and straight to the feet of Our Lady Queen of Peace. No lack of confessors in Mary Major, and it is hard to imagine a better place to pray for the intentions of the Holy Father that under the Madonna Salus Popoli Romani where the Pope himself goes to pray before every trip.

2)  St Paul’s Outside the Walls – St Paul’s greets the weary pilgrim with an oasis of peace. Green grass, tall palms and the silent statue of the Apostle to the Gentiles makes for a quick gear shift to contemplation. It even has a way around security lines – emulate the apostles and “ take no staff, no bag” (Lk 9:3) and you get to go in the side entrance. St Paul’s Holy Door has an unfair advantage: it’s been around longer than the Holy Year, so after passing the first set of modern doors, look again and you will see the stunning bronze doors from 1070. Clear instructions in several languages outside the doors allow the pilgrim to properly prepare. The threshold is covered with a red carpet (who says you can’t repent in style?) and the pilgrim approaches a malachite altar with a high cross and a basin of holy water. You have arrived. Then, 100 yards away with banks of confessors lining the path, there is the tomb of St Paul, where there are more instructions for the indulgence. With copious and clean bathrooms to boot, this is the most merciful of the basilicas.