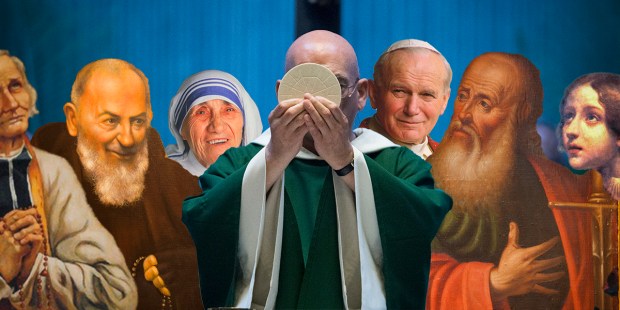 The Mass is very long and tiresome unless one loves God. – G.K. Chesterton

Do you ever feel bored at Mass?

Don’t worry, I’m not judging. When I first returned to Mass after a time away, I found the Mass boring. But Jesus’ presence in the Eucharist drew me in. And eventually, his presence in the Mass instructed me in the ways of heaven, helping me to develop a greater love for the Mass. I realized that the Mass was the most important prayer that I could pray in any day.

As Blessed James Alberione once said, the Mass is “the daystar of prayer.” In other words, nothing else we do to get closer to God even comes close to going to Mass.

That being said, while I appreciate the Mass more than I did when I first returned to the Church, I still “phone it in” sometimes. I get to the end of Mass on some days and I realize that my mind was a million miles away. My love for the Mass is something that has grown more fervent over time but it still needs work.

Perhaps, like me, you need some motivation to go to Mass, to see the value in it, to find meaning, to stay engaged, and to look forward to it with the excitement that this “daystar of prayer” deserves.

Here are some reasons why the saints did not find Mass boring:

The heavens open and multitudes of angels come to assist in the Holy Sacrifice of the Mass. – St. Gregory the Great

The angels surround and help the priest when he is celebrating Mass. – St. Augustine

It would be easier for the world to survive without the sun than to do without Holy Mass. – St. Pio of Pietrelcina

The Mass is the spiritual food that sustains me, without which I could not get through one single hour in my life. – Mother Teresa

One single Mass gives more honor to God than all the penances of the Saints, the labors of the Apostles, the sufferings of the Martyrs and even the burning love of the Blessed Mother of God. – St. Alphonsus Liguori

More to read: The Mass as described by Justin Martyr in 155 A.D.

It is joy that brought me to the faith, joy at the birth of my child, 35 years ago, and that joy is constantly renewed as I daily receive our Lord at Mass. – Dorothy Day

Jesus … [is] the Lamb that was slain but who lives forever, in every instant renewing his passion through the continual celebration of Masses throughout the world. – Blessed James Alberione

But I will end with one last motivational quote from St. Leonard of Port Maurice, (I assume he said it with a mischievous smile):

“O you deluded people, what are you doing? Why do you not hasten to the churches to hear as many Masses as you can?”

More to read: The Mass of the Very Old Men