Why I bought 100 pairs of underwear in Turkey, just before the attempted coup 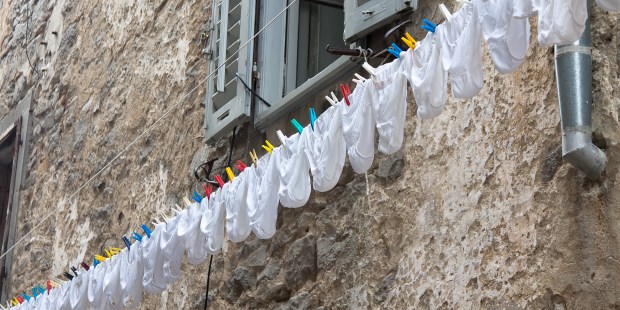 A generous parish and a day off from Lesbos provided an interesting, exhausting day of shopping

Earlier in these dispatches, I wrote of the perspective-spinning experience of distributing clothing to refugees.

You would rather die than wear it. Your teenage daughter, who is hell to shop with in the best of conditions, hasn’t ceased being persnickety just because she is living an ongoing traumatic event. She’s worse. She sits there glaring, rolling her eyes at everything. And some of what they bring out to her is corduroy anyway since tons of donations are wintery clothes. So this is the big day you waited three weeks for.

As clothing distribution continued, our supply of men’s shorts and men’s underwear dwindled down to nothing. No one wants to hang out in jeans or something heavier on a week where temps crest at close to 100, and my only shelter is a UN-built refugee housing unit (RHU) with four small windows, so I was impatiently waiting for a donation to come in to remedy the situation. My last days sorting clothes had yielded lots of winter attire, and few items useful for the moment.

After two straight weeks of shifts, I was to get my first day off. People in town spoke of a bazaar in the Turkish city of Ayvalik, directly across from Mytilini. The ferry on a Thursday, for a day trip that left at 9 a.m. and returned from Turkey on a 6 p.m. boat, costs an astonishingly low six euros (less than seven dollars). Adding to the appeal, no visa was required for a one-day trip. So I planned to see if I could get some needed clothing in Turkey.

My wife Valerie has been handling the home front, and I asked her if we could get a message to a Yahoo group largely composed of fellow parishioners at St. Benedict back in Atchison, Kansas. I figured a few hundred dollars could get me at least 50 pairs of shorts to make a dent in the situation. I was more than happy when Valerie reported that in two days a thousand dollars had been pledged. I was gratefully overwhelmed by my community’s generosity.

Another NGO had offered us some clothing and was willing to take some of the winter stuff to free up space in our container for summer items. I went with another volunteer on Wednesday to the warehouse managed by the “Swiss Cross” and, as “Swiss” would have one think, it was beautifully and meticulously organized. But among the clothing they sent over on Wednesday, there was very little men’s underwear and shorts. Operation Turkey was a go.

But for the whole 90-minute trip I couldn’t stop thinking about those who crossed the other way under cover of night in an inflatable boat, especially the family who, the night before, didn’t make it. Onboard, I met a couple of Americans who had been volunteering at the larger camp, Moria, run by the Greek police. With 2,100 residents (detainees, since it is officially a detention center), conditions there sounded way worse than Kara Tepe. They promised to help me carry the stuff back on board if my mission proved successful.

As we neared Ayvalik, a lovely sea town whose Roman pines contrasted with the abundant olive trees on Lesbos, I could see the chalk-white minarets of its main mosque and the sturdy towers of a fortress built no doubt to protect it from less welcome visitors from Europe centuries before.

I can decipher some Greek signs, but Turkish is a total mystery to me. I just followed the crowd. After roughly a mile and a quarter we snaked down a side street and things took on the look of a bazaar, with sellers hawking their goods in the street and a rag-tag assortment of canvas tarps shielding shoppers from the aggressive sun. Dresses, sheets, shirts and more hung from the web of canvas above. Tables overflowed with items, ranging from Nike shoes to Arab scarves. And it went on for blocks, maybe ten square blocks or more.

I stopped and haggled at a few tables but wasn’t able to get sellers to budge on cargo shorts for under 35 Turkish Lira (TL), roughly 2.9 to the dollar that day. Better than Greek prices, but nowhere near a bargain. I finally came across a vendor with a very large stand selling jeans and with a large table of lighter denim fabric cargo shorts. The price was 25 TL, but when I told him I needed a hundred pairs, I became his best friend. We settled on 15 TL a pair, but I insisted it had to be via credit card. The bazaar must be a family affair, since he walked me over to a shop four stalls to the left and I swiped my card for 1500 Turkish Lira, with a free lemonade to boot. We selected a good variety of sizes and it filled the large duffel and one other large bag to the brim. I began to worry about getting the stuff back to port. It was well over 100 pounds, and I wasn’t done shopping.

A smaller vendor provided the 100 pairs of underwear, but no credit card this time. I had to pay in a mixture of dollars and euros. That filled the third and last bag I had.