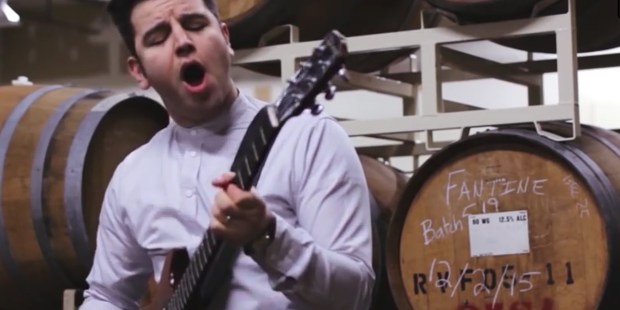 How hard times led to success

Born to a Boston-area Jewish family, Reed grew up with the sounds of gospel music all around. “My father was a music critic for a time,” he told NPR, “and you would be very likely to hear Sam Cooke and the Soul Stirrers or Blind Boys of Mississippi or Mahalia Jackson around my house growing up.”

Reed moved to Clarksdale, Mississippi after high school, playing music across the juke joints of the Delta before landing at the University of Chicago. There, he hosted a radio show called “We Got More Soul” and sang at the South Side congregation of gospel singer Mitty Collier.

Soon enough, he starting writing and recording his own brand of soul music and eventually signed with Capitol Records. Despite establishing a strong fan base and international acclaim, Reed’s contract wasn’t renewed after the company was sold to Universal, and in 2012 he jumped to a new contract with Warner Brothers. The result was the album Nights Like This, a fun, polished pop record that recovered its cost before its release date thanks in part to its use in Nike and Toyota commercials.

But once again, he was hung out to dry by his label, which unexpectedly dialed down marketing and promotion efforts for the album. “My manager’s and [my] calls and emails to the label more and more frequently went unreturned,” he recalled in a candid letter to fans, “and in the summer of 2014, I was unceremoniously dropped from the label.”

Rather than let himself be consumed by bitterness, Reed felt the excitement of a creative awakening. “For the first time in a long time, I have no responsibility to make music for anyone else besides myself and my fans,” he wrote. “There’s no bureaucracy of approvals, no stylist, no A&R, no marketing manager, just me, my guitar, and a waiting microphone.”

The result was “My Way Home,” an original song that pointed the way to the next chapter of his life: songs of pilgrimage and hope rooted in the gospel sound that won over his heart so many years ago.

Reed’s vision crystallized through an ongoing relationship with Gospel for Teens, a Harlem-based after-school program that he connected with in 2013. The New York Times profiled Reed’s work there teaching a class in gospel quartet singing. “I was really down,” Reed explains. “I’d be at home, not touring, not recording, not really writing. And then on Fridays I would come here and I would leave just completely energized by the kids and the music we were making.”

My Way Home is written, produced, and engineered to sound like a mysteriously unearthed gospel record from the 1950s or 1960s. And the only thing more surprising than the fact that Reed wrote all of these faith-filled songs himself (except for a well-known gospel song “Cut You Down”) is that he doesn’t approach them from a religious perspective.

“Somebody once said – I don’t know who it was – that gospel music is just the idea that everything is going to be all right,” Reed explains. “And that doesn’t have anything to do with a particular deity – just the idea that things have got to get better one day.”

That message, and its obvious relevance for Reed’s career, is all over My Way Home. “Strangest Thing” has Reed singing about exchanging a life of fame and pleasure only to lose your soul, while “I’d Rather Be Alone” is a kind of indie label anthem translated to the spiritual realm. “I’d rather be alone in this world of sin,” Reed sings in the Curtis Mayfield-like chorus, “than surround myself with sinners that won’t be saved.” A handful of songs (“Movin’”, “Tomorrow’s Not Promised”, “Hold Out”) are clear anthems of fortitude, where Reed is reflecting on his sojourn among the big labels and his journey back to a kind of promised land.

At the same time, gospel is not a mere tool for the young singer. He clearly has a profound and lifelong respect for the genre – not only for its sound, but for its message – and enters into it to truthfully present the good news at least as well as his heroes. There’s “Your Sins Will Find You Out” (used in season one of AMC’s “Preacher”), a searing admonition from the book of Numbers about the wages of sin; the bluesy “Eyes on You”, which ponders God’s omniscience; and the album closer “What Have We Done,” an acoustic track mourning the gradual destruction of our “common home.”

The music of My Way Home is its own world, and as Reed puts it, you don’t need to be a person of faith to appreciate the “beauty and joy” of this faith-filled music.

Still, like the legends that inspired him, it powerfully testifies to the source of that beauty and joy. “When I’ve lost my direction, you will lead me,” Reed sings on the title track. “I will follow the light which you have shown.”