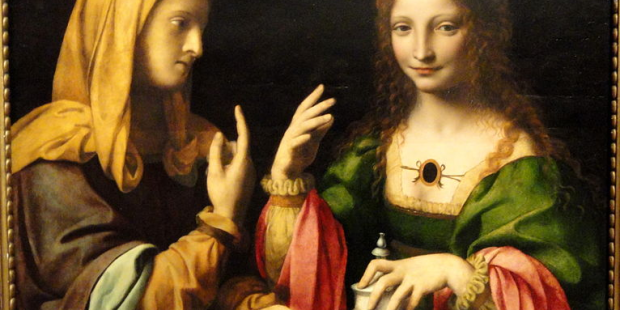 Mary Magdalene’s “status” got a big boost this year when Pope Francis decided to elevate the Church’s celebration of her to be equivalent to those for the Apostles.

But this follower of Christ still remains largely a mystery to most. Understood variously through history as a redeemed prostitute (or even — for Dan Brown fans — “the secret wife of Jesus”), she is nevertheless revered by the Church as the Apostle to the Apostles for being the one who first announced the resurrection to the Twelve.

Now, however, scholars and archaeologists at Migdal, Israel, are speculating anew about her identity.

In her hometown, recent archaeological finds suggest that Mary came from a wealthy background, a detail that would comport with the Gospel reference to certain women financially supporting Jesus’ ministry (see Luke 8:3).

Among the recent archaeological finds are objects suggesting that a large fish industry existed there: fish hooks and other fishing accessories and 40 pools to salt fish. That should come as little surprise, since the town was on the Sea of Galilee and its full name in Greek was Magdala Tarichaea (roughly translated as “tower where the fish are salted”).

“Not surprisingly, the town is known for its salted-fish industry,” said Tina Wray, a biblical scholar based at Salve Regina University in Newport, R.I.

The findings suggest that the ancient town was occupied by influential and wealthy people. Magdala was the largest and main city in Galilee until the foundation of Tiberias in the year 19.

Again, Scripture gives added weight to that view. “Usually, when a town or village is mentioned in connection with a woman’s name in the Bible, it indicates that she is a woman of wealth or higher social status,” said Wray, author of Good Girls, Bad Girls of the New Testament: Their Enduring Lessons. “We no longer have to guess because now we have real, tangible evidence that Mary was a woman of substance.”

“I believe that Mary Magdalene is an older, wealthy widow who serves as Jesus´ comrade, confidant, and friend,” Wray added. “That she is present and bears witness to the two most pivotal events in the Gospels, Jesus´ crucifixion and resurrection, demonstrates that she is a courageous and steadfast disciple. … Through careful reading of the Gospels and other sources, we have begun to recover the true image of Mary Magdalene as Jesus´ trusted friend and Apostle.”

The Magdala Center, a project of the Legion of Christ, has already discovered a synagogue buried in the earth.

In 2009, during the mandatory archaeological tests required for building a guesthouse at the site, archaeologists unearthed the only 1st-century synagogue on the Sea of Galilee – one of only seven synagogues from this period in the world – along with the archaeological remains of the 2,000 year-old city of Magdala. “It is certain that Jesus taught” in the synagogue, promotional materials claim.

The archeological team doing the work there is from three institutions—Universidad Anáhuac de México, Universidad Autónoma de Mexico, and the Antiquities Authority of Israel.

Bishop Giacinto-Boulos Marcuzzi of the Latin Patriarchate in Israel will celebrate a special Mass on July 23 to celebrate the first Feast Day of St. Mary Magdalene at Magdala.

More to read: Magdala, the Home Town of Mary Magdalene, Is Being Resurrected