A light from the East grows in Massachusetts

Maronite Servants of Christ the Light

Religious sisters, Maronite Servants of Christ the Light, are a first in the US

Marla Lucas had just graduated from college and was ready to embark on a career in journalism. But, as often happens, someone came along whose deeply magnetic personality led her to change her plans.

“Jesus made it clear to me that my life was meant to be offered as a consecrated religious to serve his people,” she said. “I was captivated by His love and drawn deeply to let go, leave all things and to follow him.”

After a year of discernment, Lucas entered a religious community whose focus was evangelization and catechesis. And she served happily in that community, the Parish Visitors of Mary Immaculate, for the next 25 years.

Sister Marla Marie came from a Lebanese-American family in New York, and she was close to the traditions and spirit of the Eastern-rite Maronite Church. There really wasn’t a religious community in North America where she could live a Maronite religious life, and going to Lebanon, which was at that time in the midst of a civil war, was out of the question.

So she would practice Roman Catholic traditions with her sisters and attend a Maronite church whenever she could.

Then came another call from the Lord—a “call within a call,” as Sister Marla Marie describes it. While she was directing religious education at a Maronite parish in Washington, D.C., when Bishop Gregory Mansour, the leader of the Brooklyn, N.Y.-based Maronite Eparchy of St. Maron, stopped by.

As the two discussed her spiritual journey, he proposed, “Why don’t you come home?” suggesting she help with a new initiative in the diocese.

“Many of the workers, the catechists, volunteers, even in leadership in our parishes are women, and I’ve always felt women have something more to offer, and that’s a consecrated woman, working alongside the priests in their ministries,” Bishop Mansour said in an interview. “I always felt that that was missing in our Maronite Church here.”

The Maronite Servants of Christ the Light, which Sister Marla, now known as Mother Marla Marie, began in 2008, would be the first congregation of active Maronite sisters founded in the United States. (Another, the Antonine Sisters, who are active in Ohio, were founded in Lebanon.) The new community’s mission is to assist parish priests in a variety of pastoral works of mercy, bringing the gift of their spiritual motherhood ranging from directing religious education programs to working with families, youth, elderly, offering retreats and spiritual direction.

As Bishop Gregory has commented: “A mother’s touch, a woman’s touch is life-giving for our families.” 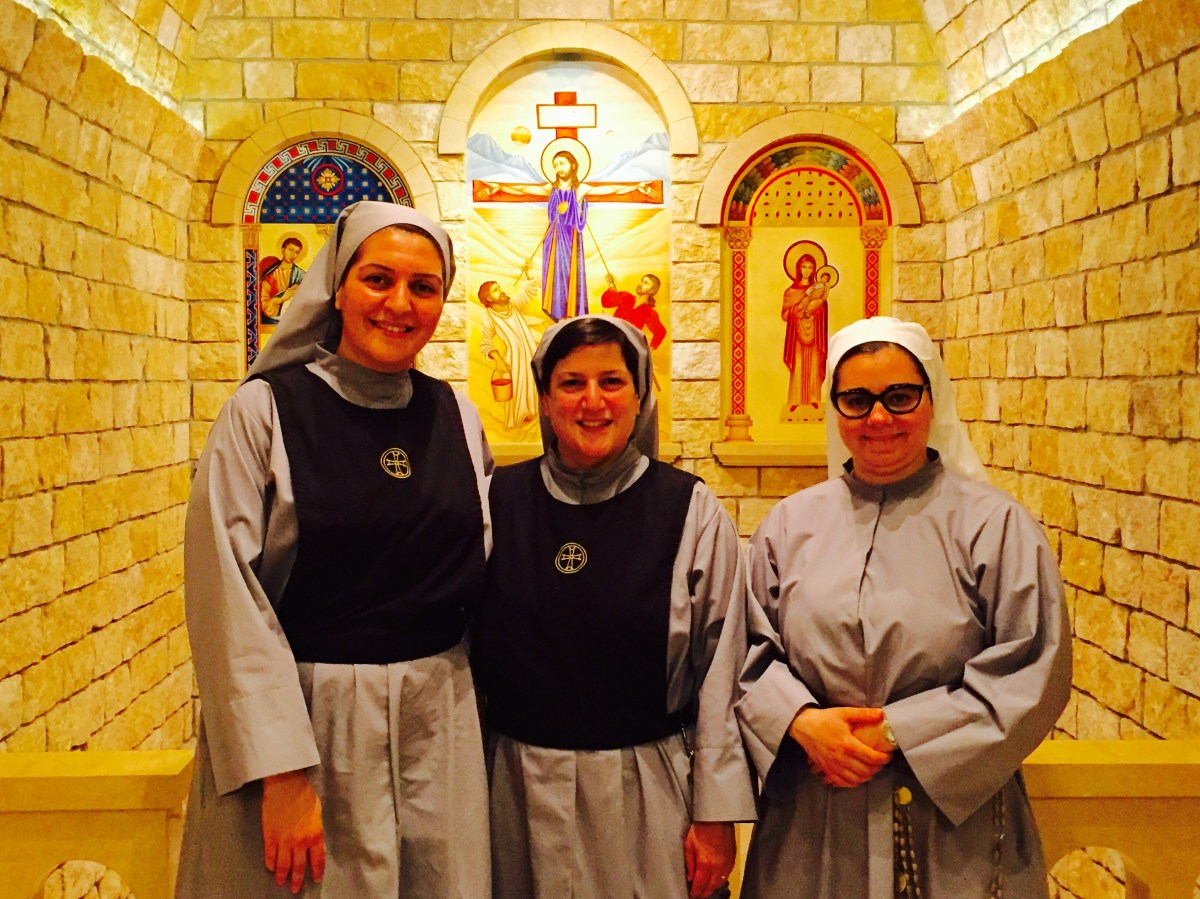 A  key element of the new community’s charism is an identification with Mary, the Mother of God. Mother Marla Marie chose “servants” as part of the community’s name after Mary’s pronouncement at the Annunciation that she was “the servant of the Lord.” The last part of the name, “Christ the Light,” draws on an image of Jesus preeminent in Maronite spirituality, particularly in the writings of St. Ephrem.

“Our liturgy is woven throughout with reference to Christ as light or different metaphors of light,” Mother Marla Marie said. “As consecrated women, we are to radiate the light of Christ, the light of his merciful love and hope to those we serve.”

That appears to be working out well with the community, which, at three members, is still small but looks forward to growing, with inquiries coming in from around the country to their base in Dartmouth, Mass.

“They come here often, to attend Divine Liturgy, and afterwards they interact with parishioners, especially the children and women,” said Subdeacon Brian Dunn of St. Anthony of the Desert Maronite Church in Fall River, Mass. “They’re a breath of fresh air. You can see the Holy Spirit in all three of them with their smiles and their grace. I wish we had more like them, to spread God’s good news by who they are.”

Historically, as waves of Catholic immigrants from the Middle East and Eastern Europe settled in America, where the predominant Catholic Church is Roman, young women who have felt a calling to religious life have often ended up joining communities where their Eastern spirituality and traditions had to be put aside or mixed in with Western practices. But in recent years, just as Eastern Catholics are recovering practices such as a married priesthood, women and men religious are finding ways to return more fully to their roots.

Even in Australia, where Maronite parishes are larger than those in the United States, there was not a place where a young Maronite woman could go to live a religious life according to her spiritual heritage, unless she went to Lebanon.

Sister Therese Maria Touma is one of two Maronite Servants who hail from Down Under. “I was drawn to the Maronite Servants congregation because of their contemplative apostolic life and mission in living out spiritual motherhood in our Maronite Church,” she commented.

Like Mother Marla Marie, she grew up in a Maronite family. A pivotal moment in her vocational discernment came in 2008, when she attended World Youth Day in Sydney. She said Pope Benedict XVI’s “profound and encouraging words spoke to me personally: ‘Do not be afraid to say yes to Jesus, to find your joy in doing his will, giving yourself completely to the pursuit of holiness, and using all your talents in the service of others.’”

Though the sisters do most of their apostolic work in the parishes near their convent in Eastern Massachusetts, they do quite a few speaking tours as well. They were recently in San Francisco for a national gathering of Maronites. They make good use of social media to minister to youth.

“We do a lot of spiritual and pastoral counseling over the internet and social media because that’s where most teens and young adults interact,” Mother Marla Marie said. “We focus on helping young women to begin a regular prayer life. This is where they can hear God calling.”

But she insists that there be a balance to the life they lead. Just as important as the apostolic work is the time spent in contemplative prayer.

“We live a deep Eucharistic prayer life,” she said. “Much of our day, outside of mission, is a prayer life that is scriptural, liturgical and Eucharistic: the daily Divine Liturgy, the Maronite Divine Office, which is called the Divine Praises, a daily hour of adoration, meditation, spiritual reading.”

Prayer in the Maronite Church comes from the Syriac-Antiochene tradition, she explained, and includes poetry composed by St. Ephrem. “It’s a form of mystical prayer. I’ve heard it described as: our prayer is praying to God Who is mystery, and mystery is best expressed in poetry because how do you grasp mystery? How do you encompass mystery? You can’t.”

And yet, eight years after launching the community, Mother Marla Marie feels very much at home.

“Coming to this foundation was like coming home,” she said. “The spirituality of the Maronite Church is such a fit for me, spiritually—not that I was malnourished in the Roman Catholic Church, but it just resonated in my heart.”