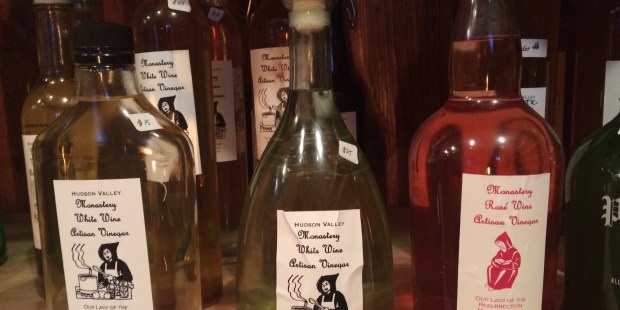 The secret is in the “mother”

What’s that old saying? You can attract more with honey than with vinegar? Brother Victor Antoine d’Avila-Latourrette proves it wrong.

That long French name might ring a bell with readers who are familiar with a number of spiritually-themed cookbooks that were published in recent years, Twelve Months of Monastery Soups and The Monastery Garden Cookbook among them.

But to locals in the lower Hudson Valley region of New York, Brother Victor Antoine’s name conjures up images of an essential ingredient. Turns out this hermit monk has what aficionados call a “mother,” with a lineage going back four decades.

“The term refers to the secret sauce behind the artisanal vinegar carefully crafted at a small, woodsy monastery off of Barmore Road in the Town of Union Vale,” explains The Poughkeepsie Journal.

“Mother” is a gelatinous mixture of cellulose and acetic acid bacteria used to convert wine, cider or other alcoholic liquids into vinegar.

At Our Lady of the Resurrection Monastery, Brother Victor Antoine d’Avila-Latourrette has been using the same mother for more than 40 years, the gooey catalyst evolving with every batch.

The slow fermentation process takes between six months to a year.

What emerges is a panoply of red and white vinegar types that have been featured in the New York Times and some Manhattan restaurants.

Brother Victor Antoine sells vinegar throughout the year—it’s the primary way he supports his monastery—but relies heavily on a two-day festival in July, where sales this year exceeded 500 bottles.

“A-maz-ing,” said one attendee. “You can’t find these flavors anywhere else.”

The vinegar is best served mixed with vegetables before oil is added.

If Brother Victor, a 76-year-old native of France, has had a modicum of success bringing foodies in touch with the spiritual, he also hopes to see a union of another kind. He began his Benedictine monastery in 1977. The conversion of the raised ranch that he bought included the building of a small chapel in an Eastern Orthodox style. Brother Victor said he prays for the reunion of the Eastern Orthodox and Catholic Churches.

“We pray dearly for the reunion of the east and the west,” Brother Victor said, “so that all the churches become the undivided Church of Christ.”