And So Begins the Party That Never Ends

The Halleluya Festival, bearing the catchphrase “The Party That Never Ends,” kicked off the festivities today in a truly multicultural fashion. The day started with the Brazilian samba group Alto Louvor followed by the eclectic Indian group Rexband. Next the boy band Hopen, comprised of four French brothers, took the stage, and finally the group Missionario Shalom closed out the day’s activities.

The reaction of the crowd is best summed up in the words of Rexband: “Where the spirit of the Lord is there is freedom, joy, and dancing.” The upbeat music had everyone on their feet dancing side by side with other pilgrims from all over the world.

Cardinal Christoph Schonborn of Vienna and Cardinal Orani Tempesta of Rio de Janeiro stopped by the event to say a few words before walking around and greeting pilgrims. Cardinal Tempesta spoke of the Halleluya Festival as a very important part of World Youth Day: “When I was overseeing World Youth Day in Rio de Janeiro I wanted Halleluya Festival to be there as part of the event. I’m very happy to see it happening here in Krakow too.”

The party continues tomorrow from 2:00-10:00 pm in Plac Szczepanski, just down the street from Krakow’s main square. Tomorrow’s event will feature popular Italian band The Sun. 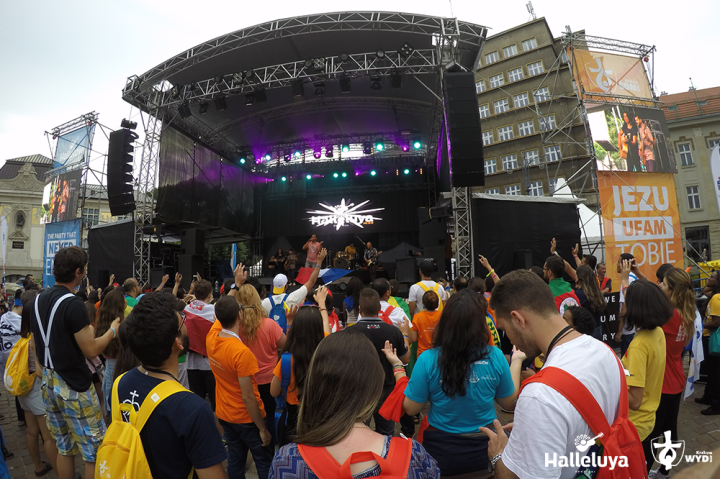