Paddy Kelly at WYD, where a boisterous concert evolved into Adoration 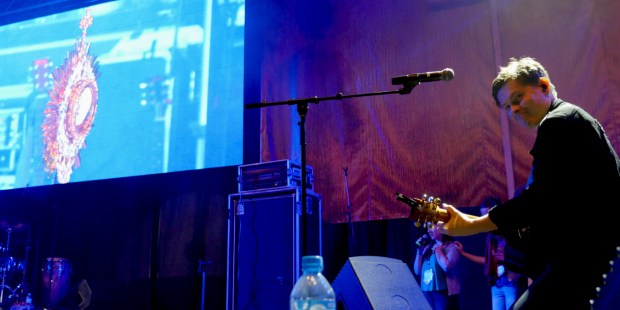 Suddenly, instruments and equipment was pushed aside, and an altar delivered in flash. Then, a monstrance…

Wednesday evening, Nowa Huta. The concert began in an ordinary way. Percussion and a few guitars, the frontman entering a smoke-enveloped stage and the audience shouting.

There was singing and dancing; flags from all over the world fluttered above the crowd. Suddenly, the venue became silent; the audience stopped jumping up and down and … got down on its knees, as a rock concert by the Irish singer Michael Patrick Kelly unexpectedly changed into a touching religious service.

The tenth child in the Kelly family commonly referred to as “Paddy” came to Krakow at the invitation of the Emmanuel Community, operating in twenty countries (as Kelly mentioned during the concert, his guitarist Franz Kinski is also its member).

Paddy welcomed the audience in a few languages: “Do you speak English a bit?”, “Parlez Vous Francais?”, “Sprechen Sie Deutsch?”

The singer was in high spirits, one might even say a bit hyper. He would run and dance on the stage; he jumped on his speakers. When he stood on one of them, only a few yards away from the audience, someone threw the Irish flag at him.

“The Irish are here!” he rejoiced.

That started something. After a moment audience members from all over the globe began to throw their symbols of their country at him and he accepted every one. At the end of this short presentation of the nations he disappeared backstage for a moment, and then emerged with a huge flag of the world, with the colours of all countries and a dove, a symbol of the Holy Spirit and peace emblazoned on it.

During his performance the artist made a reference to the Monday assassination of Fr. Jacques Hamel, a priest in a church in Normandy, France, and dedicated the ballad “Brother, Brother” to the slain priest. Kelly, who has spent six years in a monastery as a monk, seems to be still identifying with the religious.

After the concert he spoke of his life, family, his fatigue show business, which he experienced over a decade before, of his stay in a religious order and of his rejuvenation. He reminisced on the 2000 WYD in Rome, in which he participated, and urged the audience not to lose what is fundamental and crucial in this meeting of youth in the dancing and singing. And then something unexpected happened.

Kelly invited to the stage Kinski’s five children who, like their father, also belong to the Emmanuel Community, and the band helped the audience to shift into a prayer mode that was profound.  Guitars and drums and speakers were put aside. Before you knew it, the Emmanuel Community team installed an altar, lit lamps and adorned the place with flowers. A procession of priests brought in a monstrance, which looked all the more magnificent in the blaze of stage light.

The audience knelt down. Just like Paddy, who continued to sing and play the guitar on his knees.
He prayed aloud in English and added in Polish “Jezu, ufam Tobie” [Jesus, I trust in You!].

To watch a video of this event, click here.

Translated from the Polish