TODAY: A call to fasting and prayer, for the sake of world 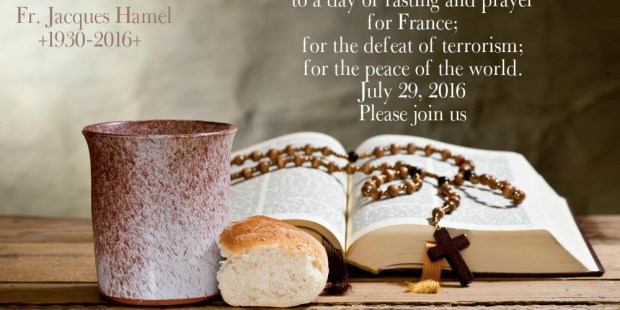 In tribute to Fr. Jacques Hamel, slain this week, and for an end to the scourge or terrorism, Aleteia invites you to join us…

Bishop Georges Pontier, President of the Bishops’ Conference of France, has called Catholics in France to a day of fasting and prayer, “for our country and for peace in the world” today, July 29, just three days after the cowardly murder Father Jacques Hamel, the first French martyr of the 21st century.

Shocked by the attacks in Saint-Étienne-du-Rouvray, and in Nice and Paris, and by the almost weekly suffering that is taking place through terrorist actions the world over, Aleteia joins this initiative and invites our readers and friends to respond positively to the call of the Church. We ask all people of faith and good will to participate, fasting and praying as they are able.

Why fasting?
Fasting is at once a sacrifice of atonement and salvation. Throughout scripture, the prophetic call to fasting is a propitiatory sacrifice — a source of justice against the oppressor, mercy for the challenged and salvation for the sinner. Fasting opens up a treasure chest of grace.

“Fasting subjects the flesh to the spirit, mind submits to God revealed God to man,” said Father Hyacinthe Montargon, priest and preacher to the Kings of France and Poland. Fasting is a discipline, according to John Paul II helps to “dominate and correct tendencies of human nature wounded by sin.” (Vita consecrata)

Is fasting efficient?
To his disciples, who were powerless to cure a young man possessed, lunatic or epileptic according to the Scriptures, frustrated and discouraged, Christ replied: if you have faith as a mustard seed, you will say to this mountain, ‘Move from here to there,’ and it will move; and nothing will be impossible for you. However, this kind does not go out except by prayer and fasting.” (Mt 17:20-21).

With fasting, voluntary sacrifice to God, we participate in the sufferings of Christ for the sake of the the victims of blind terrorism and absurd hatred. Promoting humility, introspection, fasting helps the faithful to pray in the best possible way, and to focus on what is essential: the Word of God, the communion of saints, the meditation of holy mysteries.

Yes, it is efficient.
In 2013, Pope Francis declared a similar day of fasting for peace in Syria, scheduled for September 7, 2013. Two days later, on September 9, Russia proposed to place the Syrian chemical arsenal under international supervision in order to insure its destruction. A few days earlier a French air raid on Damascus was recalled at the last minute under pressure from the White House, reluctant to embark on a new war in the Levant without an international mandate.

Why Friday?
Friday is the day of the crucifixion of Christ — a traditional day of fasting for Catholics and Orthodox Christians. This day of obligation is even referred to an article in the Code of Canon Law: “Abstinence from meat or another food according to the provisions of the Episcopal Conference, will observed every Friday of the year, unless it falls one day marked with solemnity; but abstinence and fasting to be observed on Ash Wednesday and Friday of the Passion and Death and of our Lord Jesus Christ.”

To assist us in this day of fasting, Magnificat Magazine provides helpful prayer:

The Lord is my light and my salvation; whom shall I fear? The Lord is the stronghold of my life; before whom tremble I? Ps. 26.1

“Lord, break the folly of those who terrorize their fellows”

God our Father,
you who are the source of all love,
we beseech thee,
hear us:
Take care of those who suffer;
strengthen the wounded and dying,
make welcome those who died.
Console and comfort
those who have been bruised, and terrified,
and deliver them from all their troubles.
Bless the men and women who dedicate their lives
to the service of others,
bringing all protection, relief and care.
Defending persecuted Christians
who suffer for the sake of your name.
Break the folly of those who terrorize their fellow men.
Show the strength of your arm
to those who build their power on the suffering of others.
Put end to the power of those who violate your commandments.
Teach us to love one another,
as your Son Jesus Christ our Lord loves us.
Give us the strength to bless those who curse us
and the grace to do good to those who hate us.
Hasten the coming of your kingdom
still preserving
us, in unity in peace
by the bond of love.
Amen.