The Pope and the Holocaust: I am proudly and humbly connected to both 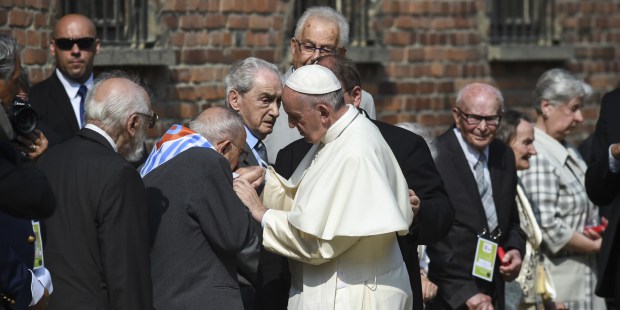 Mom died from leukemia way back in 1961. She had just turned 40 and there were no cures, no chemo and no bone-marrow transplants. She was dead within six months of diagnosis.

We lived in the Bronx in a five floor walk-up. Grandma (Mom’s mom) lived on the fifth floor and we were on the third. With Mom gone, Grandma gave up her apartment and moved in with us. I guess it was to help take care of the “little ones”; I was 15, Carolyn was 13, Danny was 11, Bobby was six and Johnny was two.

But, it didn’t work out. Grandma hated dad because, in her grieving desire to scapegoat, she saw Mom’s death as Dad’s fault and let him know it.

Dad responded by avoiding Grandma as much as possible. He began hanging out in the local saloons, which gave Grandma a real reason to yell at him.

On March 8, 1963, Grandma had a massive stroke. I saw her standing seemingly twisted in a body spasm and managed to drag her to a bed. I held her as she summoned the strength to say an Act of Contrition. Looking me straight in the eye, she slowly slurred each word. Then we said an “Our Father” together. I was crying like a baby and so were my sister and brother. Dad was in the other room with Bobby and Johnny, waiting for the priest to show up. He was not crying.

When we finished praying, she closed her eyes and became comatose. Father arrived and administered Last Rites. She died a few hours later in the hospital. That moment is etched forever in my brain’s “like it just happened” section.

Watching the pope these days in Krakow is bringing it all back to me again. Why?

Because of Grandpa. Where was the grandpa in all of this? We kids didn’t know anything about a grandpa and had never asked. We never thought about it. That’s what kids do—take things for granted.

But then Mom was gone and Grandma was gone and Dad was drinking heavily. He died two years later. It never occurred to ask, “Hey, where is Grandpa?” and just like that it was too late. Anyone we could have asked was gone.

We didn’t find out about Grandpa until four years ago. And it turns out, Krakow was his hometown. That’s why World Youth Day is making me think about him.

Mom had a brother, my namesake, Uncle Larry. He had been in the 8th Army Air-Force during World War II and his plane had been shot down on a bombing mission. He survived the war as a POW in the infamous Stalag 17. One time I asked him about his dad. He told me, “He died.” Not another word. As I grew up, I lost contact with Uncle Larry.

About four years ago I received a message on Facebook (kudos to Facebook) from my long lost cousin, Vicki, Uncle Larry’s oldest. She had been on a quest and located me. Like dominoes perfectly colliding, my sister and brothers and cousins all reconnected.

Vicki had been wondering about the missing grandpa too. Her dad had told her only the same thing he had told me, and now he was gone. So Vicki set about investigating and unraveled the mystery of our missing grandpa.

Grandma was an immigrant from Austria. A devout Catholic who never missed Mass, she married a man named Isidore Schul. This was our grandfather. He was a Hebrew man from Krakow. The immigration papers and naturalization papers confirm this. He made it to America in 1910.

What brought a Polish Jew and Austrian Catholic to connect and marry, we do not know. He and Grandma split up when Mom and Uncle Larry were young children and then he died in the Bronx in 1965. We will never know more than this.

Grandpa Irv was the only one of his family to get to America. His parent’s names were Simon and Regina Schul. We do not know if they died in the Holocaust or before it began but apparently, from what Vicki discovered, Grandpa Irv’s siblings were victims of the Nazis. Probably in Ravensbruck, but it might have been Auschwitz.

So I am a cradle Catholic who is 25% Jewish. I am humbled by this connection. Jesus, the Blessed Mother, St. Joseph, their relatives, St. Ann, St. Joachim, and the apostles were all Jewish. They were also the first Catholics. And today, as I write this, Pope Francis is in Krakow, Grandpa Irv’s hometown. I feel connected to it all and the Holocaust has a whole new meaning for me. It is all part of my heritage. My “own people” were killed there. Shalom.