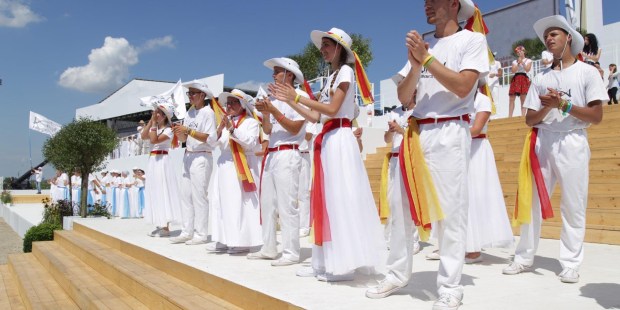 The next World Youth Day is to take place in Panama, in 2019, after two years of the event being celebrated at a diocesan level. Pope Francis made the announcement before the Angelus, confirming rumours that had been going round during yesterday’s vigil.

“In these days,” he said, “we have experienced the beauty of our universal fraternity in Christ, the centre and hope of our lives. We have heard his voice, the voice of the Good Shepherd who dwells in our midst. He has spoken to each of you in your heart. He has renewed you by his love and he has shown you the light of his forgiveness, the power of his grace. He has made you experience the reality of prayer. These days have given you a spiritual “breath of fresh air” that will help you live lives of mercy once you return to your own countries and communities.”

Pointing to the example of Mary, Francis invited young people “not to squander the gift you have received, but to treasure it in your heart so it can grow and bear fruit,” so that “each of you, for all your limitations and failings, can be a witness to Christ wherever you live”.

“God’s providence,” Francis added, “is always one step ahead of us. Think: it has already determined the next stop in this great pilgrimage begun in 1985 by Saint John Paul II! So now I am happy to announce that the next World Youth Day – after the two that will be held on the diocesan level – will take place in 2019 in Panama.”

Panama’s President Juan Carlos Varela Rodríguez was present at the mass, in the front row, and has attended all of this World Youth Day’s major events. His presence in Poland has stirred up controversy in his country, with people wanting to know why he has attended World Youth Day at the expense of the State. Today Francis answered their question.