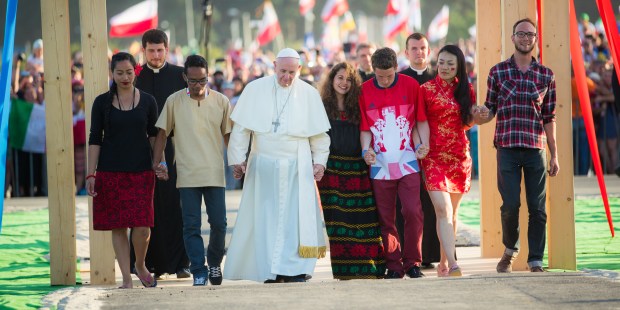 Amidst the rain, the chaos, and the fun, these five moments were especially full of grace

How do you pick a “top 5” for an event like World Youth Day? I’m sure each pilgrim has his or her own list of special moments. With Cecilia Music I had the privilege of following along with the events, often with a backstage and bird’s eye view of the happenings. Amidst many other grace-filled moments, the beauty of these five brought tears to my eyes and sent chills down my spine:

More than 25,000 pilgrims gathered for the Night of Mercy hosted by Lifeteen, the Knights of Columbus, and the Sisters of Life; they packed the arena to capacity, leaving some thousands of pilgrims outside. The night was led by Bishop Robert Barron together with Matt Maher and Audrey Assad leading music. “The joy that I experienced during the night of mercy is joy that can be found nowhere else in the world,” said Irish pilgrim Lisa Blackwell. In the words of Aleteia’s art director Jeffrey Bruno, “It felt like the entire arena was in a tender, loving embrace. In that moment I never wanted it to stop; I never wanted the night to end. We were getting a glimpse of heavenly peace, and everyone knew it.”

It started with an ad at his university. Young Polish graphic designer Maciej Szymon Cieśla took a job designing for World Youth Day, eventually becoming a full-time worker, designing the banners hanging everywhere in Krakow. Not especially religious, Maciej rediscovered his faith while working on the designs for WYD. During this same time he discovered an aggressive form of cancer, which eventually led to the amputation of his leg before he passed away in July, just before WYD. The young man, who became an example to those around him in his acceptance of the cross he was given, was acknowledged by Pope Francis: “He did a lot of good for everyone… there is something we cannot doubt: the faith of our friend, who worked so much for this WYD.”

Solidarity with Our Persecuted Brothers and Sisters

When Archbishop Bashar Matti Warda of Erbil, Iraq approached the podium at the Mercy Center in Krakow the entire stadium – more than 25,000 people – immediately rose to their feet and started clapping. Christina Shabo, a Christian refugee who spoke at the event, shared, “Even though it feels like sometimes no one’s listening, no one’s hearing, no one’s praying, in that moment, I knew that those people that were standing there felt that passion, to show them that we will stand together.”

No photos or images here; we don’t want to make a spectacle of it. Thankfully the Holy Father was fine. But why a “top 5” moment of WYD? In the words of a friend, “I was scared for the Holy Father. But the good thing about this? At least now the secular media can’t hide the fact that millions of young Catholics are gathered in Poland celebrating their faith. God brings good out of every evil.” Every major news station covered Pope Francis’ little tumble, which means every major news station gave the world a glimpse of the grace here in Krakow that has gathered together people from every part of the globe.

Closing Mass and Announcement of Next World Youth Day

This was the big one: Millions gathered in the Campus Misericordiae Sunday morning for the closing Mass. Many had gathered in prayer with the Holy Father during the vigil the night before, spending the night outside under the stars. It was an incredible sight to behold: young people from every nation gathered together in song in prayer, the crowd went on and on. “World Youth Day, we can say, begins today and continues tomorrow at home because it is there that Jesus wants to meet you from now on,” said Pope Francis during the homily. And to wrap up the event, the Pope made the big announcement: the next WYD will take place in Panama!