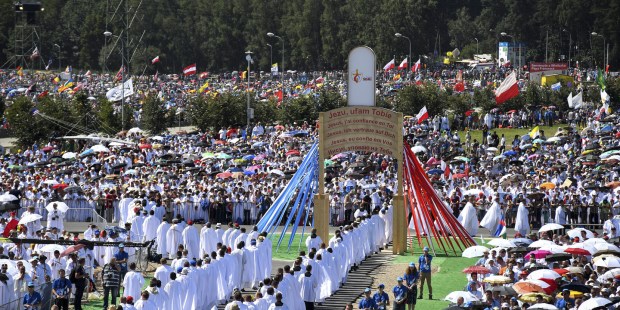 …with prayers that the pilgrims, safely home, are ready to set the world ablaze with faith and mercy

The festivities of World Youth Day 2016 have come to a close and pilgrims from all over the world are returning home, energized by the Holy Spirit, ready to set the world ablaze with the Father’s mercy, and hopefully packing along with them some great memories.

By all accounts, graces abounded during this faith-filled event that attracted between 2.5 and 3 million young people from all corners of the globe. In the midst of all the negative news of recent weeks, WYD gave the world hope for the future, showing how the next generation is poised and ready to work for peace and justice in society.

Additionally, Pope Francis gave some remarkable homilies during his participation in the events and inspired many by his silent presence in Auschwitz. Aleteia was privileged to cover many beautiful stories over the past week that exposed the full radiance of the light shining in the darkness, and we wanted to share our very favorites with you, to share the hope.


1) Why you should care about World Youth Day – There are many misconceptions about World Youth Day, with some calling it a “Catholic Woodstock,” but actually experiencing a WYD can be life-changing. Jeffery Bruno gives a first-hand account of the energy and grace that flowed through the events.

2) Sister Cristina, “the Nun from The Voice,” Stole the Show in Krakow – On the last day of the Halleluya Festival at WYD, Sister Cristina, who is famous for her appearance on “The Voice” in Italy, stole the show and did not disappoint.

4) WATCH: Divine Mercy is stronger than evil – One of the most emotional moments of Pope Francis’ visit was when he stopped to pray at Auschwitz and, instead of saying words, was still and silent before the horror of the scene.

5) The #WYD2016 volunteer who found his faith again but never made it to the festivities – Maciej Szymon Cieśla was a graphic designer with a promising career who quit his job in 2014 to work full-time as a volunteer for World Day 2016. At the time, he had lost his faith but the experience of volunteering for WYD helped bring him back. He died of cancer three weeks before WYD.

Indeed, Pope Francis was so taken by his encounter with Mary that he took a little spill while gazing upon her image and ascending an altar for the prayer vigil service. As he told reporters during the in-flight press conference heading back to Rome, “I was busy gazing at the Madonna and I forgot about the little step! I was holding the thurible and when I felt I was falling I let myself go and this is what saved me. Had I resisted the fall, there would have been consequences. But everything was OK.”

7) What would it be like to go to Pope Francis with your deepest concerns? – On the first day of his visit to Poland for the celebration of World Youth Day, Pope Francis held a video link with Italian youth who were attending the festivities in Kraków. He answered questions relating to topics such as the “terrorism of gossip” that led a girl to attempt suicide, and a group of pilgrims who were interrupted from traveling because of the shooting in Munich. He answered them with honesty and compassion.

9) 3 Witnesses testify before Pope Francis and the world, of Christ’s mercy – At the World Youth Day Vigil, prior to his address to the pilgrims, Pope Francis and those gathered in the field heard the witness of three participants who gave personal testimonies of forgiveness, conversion, mercy and the challenges they live with. We urge you to read their very moving stories.

10) The Way of the Cross. It moved us. Pilgrims carrying the cross from station to station, including some Syrian refugees. The prayers, the intense silence and unity. The Via Dolorosa was a quiet rebuke to those who dismiss World Youth Day as little more than a vacation.

11) Okay, so one more thing: Number 11! We can’t list our favorite things about WYD2016 without including our pilgrim readers, the young people who slogged through the rain, slept in the fields and then shared their fondest moments with us. We loved the videos and photographs you sent our way over the course of your week. There were some wonderful, joyful and touching images uploaded into the #KrakowtoRome contest, and we’ll have our hands full in the judging. Take a look!