Olympic wrestler credits Catholic faith for success on the mat 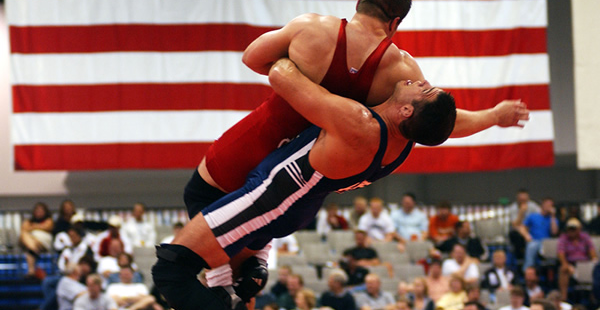 “Knowing that (God) has a plan for me has always helped me live a stress-free and worry-free life.”

Olympian Kyle Snyder learned much more than how to wrestle from his parents. Snyder, the youngest world champion in the history of USA wrestling, was taught to take his Catholic faith seriously and that faith was deepened after attending Our Lady of Good Counsel high school in Olney, Maryland.

While speaking at his alma mater, Snyder told the students, “More important to me than consistently working hard and believing in yourself and setting goals and stuff like that is thanking God.”

Snyder credits his faith in God as a primary influence that prevented him from buckling under pressure and helped him continue wrestling, “Knowing that (God) has a plan for me has always helped me live a stress-free and worry-free life.”

It was during his time at Our Lady of Good Counsel that Snyder found his wrestling could launch him all the way to the Olympics. At first he was a multi-sport athlete, but quickly discovered that he needed to devote himself entirely to wrestling.

During his junior year won a gold medal at the junior world championships in 2013 and then spent his senior year training at the Olympic Training Center in Colorado. It didn’t take long to start drawing attention from college coaches.

Ohio State’s Tom Ryan was extremely impressed by his ability and couldn’t believe his eyes.

“I thought… this guy is a freak show. We’ve got to get him to Ohio State… As a coach, you’re taught to look for red flags. There were no red flags with him. I met his family. In every area of his life, he had a desire to be elite.”

He was then recruited by Ohio State, where he continued his success, helping the college win its first national title in wrestling. Snyder set his sights on the 2016 Olympics and wound up defeating world champion Abdusalam Gadisov of Russia last September.

Snyder has always wanted to be the best wrestler in the world, but he does so out of a sense of gratitude to God for the gifts he has been given.

“I still get a little bit nervous moments before my match, but not as much as I used to. It has just allowed me to open up more and face becoming the best wrestler than I can be and the best athlete and best person I can be, because that is what God has called us to do. To be Jesus-like is what the ultimate goal is, and you can chase that personally, as an athlete, in your community, and in everything you do.”

Snyder will compete on the last day of the Olympics, August 21, and will be joined by his family thanks to a Go Fund Me account that was set-up to allow his family to travel to Rio. For this he is again thankful to the Our Lady of Good Counsel community, who played a major role in meeting his goal to facilitate the travel expenses of his family.