I see hope and beauty — could this be the end-time? 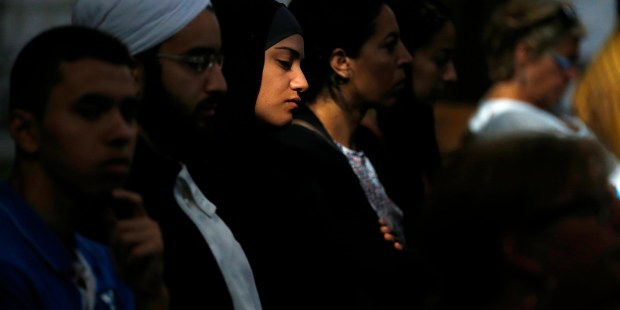 CHARLY TRIBALLEAU / AFP
A Muslim woman looks on as people attend a Mass in tribute to priest Jacques Hamel in the Rouen Cathedral on July 31, 2016.
Muslims across France were invited to participate in Catholic ceremonies today to mourn a priest whose murder by jihadist teenagers sparked fears of religious tension. Masses will be celebrated across the country in honour of octogenarian Father Jacques Hamel, whose throat was cut in his church on July 26, 2016 in the latest jihadist attack on France. / AFP PHOTO / CHARLY TRIBALLEAU
Share
Print
Leonard J. DeLorenzo - published on 08/03/16

The daily news seems to keep pace with the Book of Revelation these days as great upheavals of violence against individuals and groups are shaking the ground on which we stand. The day after Fr. Jacques Hamel was slain before an altar in Saint-Etienne-du-Rouvray, Elizabeth Scalia sounded an apocalyptic tone as she saw in his death “the beginning of the end of the world’s predominance in our awareness, and the end of ISIS, too. I think it signals the surety of evil’s ultimate defeat.” Perhaps many would feel uneasy declaring any time the end-time with certainty, though I must admit that Scalia’s words prompted me to consider more deeply the astounding significance of ISIS’s violence striking upon the Lord’s altar of sacrifice. I have grown rather convinced that “the end of all things is at hand” (1 Peter 4:7) not so much because of violence but because of the images of beauty that burst forth this past weekend: hundreds of thousands of youth from across the world gathering in peace and praise in Poland while Muslims on the other side of the continent gathered in peace and solidarity at Catholic Masses in France.

These are images of the very end of the end-time and so they are images of hope. With these two events we are indeed keeping pace with the Book of Revelation, in which the great upheavals yield to the everlasting peace of “a new heaven and a new earth” (Rev 21:1). We tend to get our imaginations stuck in the first twenty chapters of that apocalyptic book without rightly recognizing that the whole point is the coming of the Kingdom of God that is so good, so complete, so much given for our joy that the Lord decrees that “nothing unclean will enter it” (Rev 21:27). We are so given to battle narratives of good and evil that we easily forget there is only one narrative in the end: the narrative of peace that has no end.

As a sign of those blessed times we were given these two images this past week. In Poland, our young people showed us that despite what dominates most of the daily news, their greatest desire is to live in harmony. They made our story’s end present in the midst of our increasing volatility and they showed us the fruit of the certain hope we have in Christ. John Allen of Crux captured the drama best when he wrote,

“While the Islamic State and other terrorist organizations are able to recruit small numbers of young people into their deadly campaigns, hundreds of thousands of Catholic youth from all across the planet came together in the streets of a major European city this week and left no destruction behind, but rather indelible images of friendship and fraternity.”

More to read: When Father Joseph Ratzinger predicted the future of the church

In France, Muslims joined their Catholic brethren at Mass in a unique but equally stunning image of friendship and fraternity. This remarkable act of charity is at once the response and the completion of the violence those corrupted young people who falsely represented the Muslim faith perpetrated at the same altar several days earlier. From the blood of that single martyr an image of ultimate peace was given. Christians and Muslims gathered together around the sacrifice of the altar, a sure sign of that time when “the Lamb who is in the center of the throne will shepherd them and lead them to springs of life-giving water, and God will wipe away every tear from their eyes” (Rev 7:17). The Muslims in the pews were not coerced into joining the sacrifice of the Mass; they came by the force of love welling up from within. They met their Christian neighbors to “greet one another with a loving kiss” (1 Peter 5:14). Only two days earlier, the French bishops’ called for a day of fasting after the killing of Fr. Hamel and God responded to that prayer with this gift. Every Christian is bound to believe that Jesus Christ is the Savior of all and here, in these French parishes, the gift of the unity Christ promises was made present, if only for a time. I dare say we could not have imagined such beauty otherwise.

In Poland and in France we witnessed images of the end-times breaking into our time and these images were as brilliant and as clear as the “Adoration of the Mystic Lamb” in the Ghent altarpiece. As in that masterpiece, these masterpieces showed the people streaming forth from all corners of the world to gather around the Lamb who was slain on that altar and who feeds from the same altar. It is the same altar where Fr. Hamel offered the Lord’s sacrifice daily with bread and wine, until his last day when he offered it his own flesh and blood. It is the same altar where the true narrative of the City of God coming down from heaven, “with radiance like a precious stone, like jasper, clear as crystal” (Rev 21:11) is already breaking in. It is the altar of our end, an end in glory, an end that is a peace that we cannot fully imagine but is the fulfillment of all our hopes.