How can my daughter discover her vocation if she can’t be an altar server? 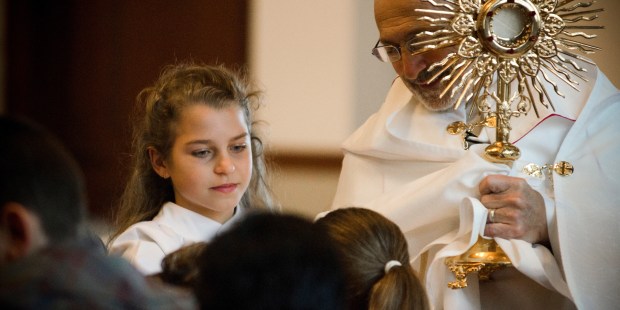 Katrina Fernandez fixes it for you

A few months ago you suggested to a reader that the best way to make her son behave better in Mass was to encourage her boy to be an altar server. You said altar serving taught your own son reverence. So how do you teach reverence and better behavior in young girls? If altar serving is the first step in vocations for men, then how do you encourage vocations in women? It seems like most of your advice is tailored to boys with girls getting left out of the mix. It’s easy to see why so many people think the Church is patriarchal and focused only on the needs of men. I’ve got three daughters; what would you say to me?

I would say that teaching reverence has more to do with the example we provide as parents then the gender of the child. A boy doesn’t necessarily have to be an altar server to learn reverential behavior just as a girl doesn’t have to altar serve in order to have a vocation.

Reverence and respect start at home. Reverence and respect for the Mass starts with catechism. It’s important that children are taught proper formation. Knowing the parts of the Mass, their meaning, and the rich symbolism behind each action will have a dramatic effect on behavior. Look into purchasing the New St. Joseph Baltimore Catechism to start. Don’t rely on faith formation or parochial school to be your child’s only religious educator.

You know what else has a major behavioral impact… dressing nicely. You know how you behave more ladylike in a dress and heels? Apply that same principle to Mass attendance. Boy or girl, a child whose parents put an emphasis on dressing up for Mass is going to learn early on that Mass is something special and important. I recommend checking out this article and video by Brandon Vogt for more information on how dressing up positively impacts our demeanor.

To sum up your question on teaching your daughters reverence — dress them up, set the example yourself, teach them the Mass, and make it clear you expect a certain type of behavior.

Regarding your question of vocations, altar serving isn’t the only source for vocations. Yes, a majority of priests did act as altar servers, but that doesn’t mean there are no other influences that encourage vocations in children. The Center for Applied Research in the Apostolate (CARA) noted that singing in the choir impacted female vocational discernment by 33%. Other influences cited were participation in faith formation programs (48%!) and parish youth activities. Some dioceses participate in programs like Totus Tuus or have specific organizations catered to fostering vocations such as, within my own diocese, Duc In Altum, which is specifically designed for discernment in young ladies. But truly, the main influence for vocations is the holiness of the family as a whole.

It’s not fair to say that the Church doesn’t put as much emphasis on female vocations as it does the priesthood without doing some research within your own diocese. I’ve often found those who claim the Church is patriarchal have a tendency to devalue the religious life of women as inferior to the priesthood, which comes close to endorsing clericalism. Consecrated service to Christ and his Church: it’s all good.