The Devil vs. St. Jean Vianney 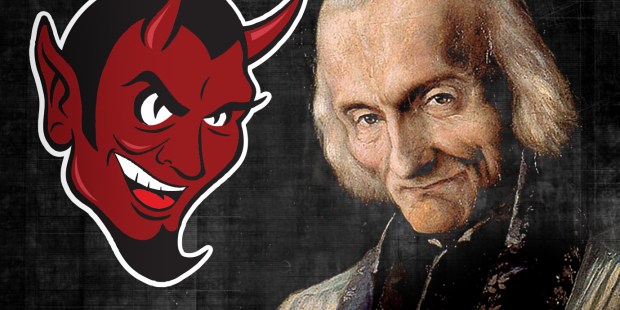 The final words of Father Jacques Hamel, “Begone, Satan,” bring to mind another French priest who had life-threatening encounters with the evil one and spoke strong words to his attackers. While this priest was not brutally murdered like Fr. Hamel, the devil tried his hardest to physically assault him in order to prevent the spreading of the Gospel.

Who was he? Saint Jean-Baptiste-Marie Vianney.

Vianney is well known for his encounters with Satan. For 35 years Satan threw everything he had against the holy priest who would hear confessions for sixteen hours each day.

At night Vianney would hear taunts, harrowing voices, evil singing, or shouting. He was physically dragged from his bed and one night his bed caught on fire. This torment would prevent him from having much sleep, but it did not deter him from living a life of holiness.

His ability to read souls and teach the profound truths of the Gospel brought him a lot of attention. Men and women would flock to his parish from miles around. However, Vianney was a very humble man and never sought any reward or respect from his people. There is a story of a neighboring priest who was jealous of Vianney’s fame and started a petition to remove him from Ars because of his lack of studies. Vianney caught wind of the petition, signed it himself and sent it off to the bishop! Thankfully, the bishop saw through the petition and didn’t do anything with it.

Vianney accepted the torment from the devil and knew that he was attacking him because of the many sinners that were being reconciled. He would often get attacked the most the night before a “big sinner” came to town to confess their sins.

He became so accustomed to the encounters that he gave a nickname to the devil, calling him “the grappin.” He said once, “Oh! the grappin and myself? We are almost chums.”

Saint John Vianney underwent such horrifying attacks because God knew he could handle them and they would strengthen him for his ministry of mercy. Saint Paul wrote to the Corinthians on this topic, “God is faithful and will not let you be tried beyond your strength; but with the trial he will also provide a way out, so that you may be able to bear it.” (1 Corinthians 10:13)

Satan’s attacks on Saint John Vianney were a “last resort” as the daily temptations that we are all familiar with did not do anything to the saint. So the devil amped up his game and tried to scare the priest into submission. However, instead of cowering in his room and submitting to the will of Satan, Vianney received God’s grace to follow will of the Father and remain faithful to the end.

Above all things Satan is a terrorist who never stops striking fear in our hearts, hoping that we will be afraid of him and think he is more powerful than God. This was true in Saint John Vianney’s time and certainly is the case now.

Satan is using these acts of terrorism to cripple us and prevent us from spreading God’s mercy to all people. We must stand against this tyranny of evil and, as the Archbishop of Rouen said, “be a witness that violence will not win in your own heart.”

Is it coincidence that Satan attacked Saint John Vianney before the “big sinners” came to town and that in our own time, violence is increasing during the Jubilee of Mercy? Let us remain faithful to Christ and “fight the good fight,” committing ourselves even more to be missionaries of mercy.