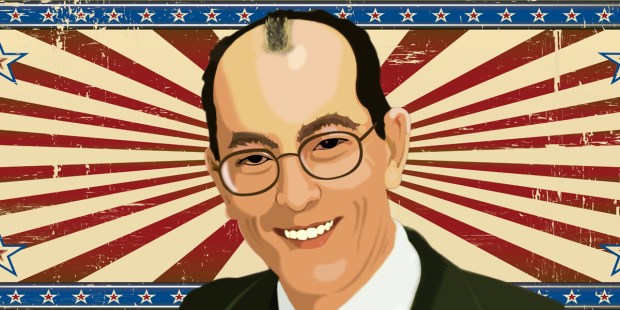 As mainstream political parties become parodies of themselves, a professional magician grounded in Catholic Social Teaching heads up a fledgling alternative

Mike Maturen may be the most unusual candidate for president of the United States this year, in that he refuses to comment on the nominees of the two major political parties, other than to say he’s “not a fan” of either.

In a deleterious political season like this one, where “not a fan” may resonate with a significant portion of an electorate unable to vote for either Hillary Clinton or Donald Trump in good conscience, an emerging party with the right message can make real inroads into the political mainstream. Maturen believes the American Solidarity Party, from which he has announced his candidacy for president, may be the organization to do just that.

Asked by Aleteia to opine on the two frontrunners for the White House, Maturen demurred: “Because I believe in civil political discourse, I won’t say much more about them, other than I believe that the ideas and policies of the ASP are what is right for America. By not participating in the current attack-style of politics, we can show our country that civil discourse still works,” he added. “There is nothing wrong with vigorous debate, but personal attacks, slander and outright lying have no place in political discourse.”

The American Solidarity Party is a Christian Democratic Party, a kind of political organization that is more familiar in Europe than the US. Its stated aim is to “seek to promote the common good and the material and spiritual welfare of all people, thereby raising consciousness of the Christian worldview.”

“It is our mission to rebuild our country into one that can stand forever, based on right and moral principles and policies,” he said in his acceptance speech.

Founded in 2011 as the Christian Democracy Party-USA, the ASP bases its platform on Catholic social teaching. Maturen, 51, who was adopted into a Catholic family, describes himself as an “honest and ethical Catholic gentleman” who would bring leadership skills to the Oval Office developed through his experience with the Knights of Columbus (he is a district deputy in Michigan).

A 2002 graduate of the Minnesota Graduate School of Theology, Maturen professes an alignment with Catholic teaching, particularly in its emphasis on respect for the sanctity of life from conception to natural death; the concepts of subsidiarity and solidarity, and a reluctance to rely on the use of military force when diplomatic solutions are available and have not been exhausted.

“Subsidiarity in its basic form basically says that if something can be done at a smaller, more local level, it should be,” he explained. “I am a huge believer in local charity. Our small community, for example, has a local baby pantry and two food pantries. In order to have an across-the-board solution, I believe government probably needs to have a limited hand in it. There are communities that do not have such resources, and government can step in.  Of course, there is also the welfare safety net for those that need a little extra help.”

Setting policy according to the concepts of solidarity and subsidiarity will help ensure that no corporation will gain an undue amount of influence in our economy or in our politics,” he maintained in his acceptance speech.

As it is, he said in the interview, local businesses, such as family farms, “have been pushed to the margins by large corporate…operations.”

Believing that a “strong family unit” is the “core of a well-functioning society,” Maturen noted that “most developed nations offer a paid maternity leave,” which “allows for the proper care of and bonding with the child.” He supports home-schooling because, he says, “no one can teach our kids like a parent. Allowing for and supporting home-schooling is a direct result of the concept of subsidiarity.”

He said the ASP is calling for a decentralized single-payer system of healthcare. “We feel that this is the best expression of our distributist/solidarity principles,” he said.

The party supports immigration reform which would include a “path to citizenship for those who are currently living here undocumented,” he said.

In the realm of foreign policy, Maturen — who is a car salesman and professional magician — outlined the ASP’s platform:

We call for an end to unilateral military intervention in foreign countries and the closing of US military bases abroad where these are not required to protect diplomatic missions or to meet explicit treaty obligations.

We condemn the use of torture—by whatever method, for whatever purpose, and by whatever euphemism it may be called—by any representative of the United States or in its interests. Those who participate in or authorize torture should be stripped of position, prosecuted, and punished to the fullest extent of the law.

We oppose the use of lethal drones against civilian populations in neutral countries.

We call for the prohibition of private arms sales from the United States to foreign countries.

The ASP believes that a less aggressive foreign policy will reduce the threat of terrorism within our borders. In the short term, we call for a review of the effectiveness of centralized and specialized anti-terrorist agencies, such as the TSA.

Maturen said he has pledged to work with elected officials from both parties who might be open to the ASP’s ideas. He says his running mate, a Texan named Juan Muñoz, 37, also is fully on board with Catholic social teaching.

“I see our party as being about community,” Muñoz said in his acceptance speech. “In the United States, it’s all about individual rights, individual pursuit of happiness, individual storing of wealth. But we are a movement that understands that the individual cannot thrive without the community.”

Thus, the party is pro-life, for example, “because we see that child in her mother’s womb as a member of our community,” he said.

The angst many people of faith are going through over this year’s choice between Trump and Clinton may find relief in a party such as the ASP. But the party must first struggle to get on the ballot in individual states.

“As of right now, it looks as though we will actually be on the ballot in a handful of states, and write-ins in most of the rest,” Maturen said. “There are a few states, such as South Carolina, that do not allow write-in votes.”

Muñoz, in his acceptance speech, said he is “not delusional” about getting elected, but sees the run as an opportunity to further the goals of the party.

[Editor’s Note: Take the Poll – Would you consider Joining the American Solidarity Party?]