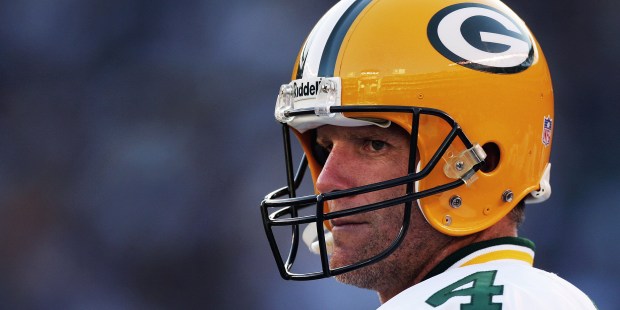 Donald Miralle / Getty Images North America / AFP
Brett Favre
The legendary Green Bay Packer quarterback's faith never wavered, despite a series of family tragedies: “We know that in everything God works for good with those who love him, who are called according to his purpose." (Romans 8:28)

His wife, Deanna, whom he describes as “the best teammate I’ve ever had,” to introduce him at Saturday’s ceremony

This weekend Brett Favre, one of the greatest NFL players of all time, will be inducted into the Pro Football Hall of Fame in Canton, Ohio. On Thursday he was presented with the prestigious “gold jacket,” the highest honor a player can get in the NFL.

What is unique about the event is that his wife Deanna presented him with the jacket and will formally introduce him at Saturday’s induction ceremony. She is only the second wife of a football player to do so.

Favre said about the decision to have his wife participate, “Deanna is the best teammate I’ve ever had…She has been by my side throughout this journey and I’m so excited that she gets to play such an important role for me.”

The two have been together since high school and their teamwork was tested early on in their relationship. At age 19, Deanna found out she was pregnant and as Favre was the starting quarterback at Southern Mississippi University, they were not ready to be parents.

Her friends pressured her to have an abortion, but Deanna refused, saying, “there was no way I could destroy an innocent life.” She even admitted that having premarital sex was “a bad choice, and for every choice there’s a consequence.”

It was their shared Catholic faith that ultimately convinced them not to have an abortion and so Deanna gave birth to their first daughter, Brittany. They remained together throughout Favre’s success in college and the NFL and finally got married in 1996 at the height of his career with the Green Bay Packers.

Everything seemed to be going right. Favre became a three-time league MVP, won a Super Bowl, and started to break all the records.

A day before a game against the Oakland Raiders, Favre was notified of the death of his father. This devastated Favre as he greatly admired his father, from whom he received much of his hard work ethic and stubborn personality. In fact, his father had always wanted to present Favre at the Hall of Fame ceremony and would have done so if he were alive.

He took his pain to the football field, passing for 399 yards and 4 touchdowns to solidify a 41-7 victory. His father wouldn’t have had it any other way.

Ten months later his brother-in-law was killed in an accident and shortly after that Deanna was diagnosed with breast cancer. It was a whirlwind of a year full of emotions that ultimately strengthened them and deepened their Catholic faith.

Deanna said in an interview with The Compass, “I just feel like, with faith, it helps me see the good in everything…I thank God all of the time that I have faith because I don’t understand what people would do without faith.”

She credited her mother for giving her a firm foundation, something to stand on during the many trials they experienced, “She was a huge influence. We were brought up Catholic and we’re still strong Catholics.”

After four months of chemotherapy, Deanna was declared cancer-free. The experience prompted her to extend their charitable foundation to include organizations that provide financial assistance to breast cancer patients. Their foundation, Favre4Hope, has donated $8 million dollars to charitable organizations since its inception in 1995.

Additionally, Deanna was the driving force behind a pink Pray for a Cure Bible that was published to raise awareness of breast cancer. Deanna handpicked Bible verses aimed at breast cancer survivors and patients. Her favorite Bible verse is Romans 8:28 (“We know that in everything God works for good with those who love him, who are called according to his purpose”), which has motivated her to persevere in every trial.

Priests who knew the Favre family in Green Bay and Mississippi said they were impressed by their faith. Fr. Tommy Conway, their pastor in Mississippi, said, “I think Deanna has shaped Brett Favre into the man he is today. I give her an awful lot of credit. They have faced adversity in their lives and they are both better people for it.”

In the end, while Brett Favre will go down in history as one of the best NFL players to ever play the game, he and his wife understand that none of it will matter when they part from this world to the next. Faith helped them get through some of the most difficult trials in their lives and continues to guide them forward into whatever else God has in store for them.