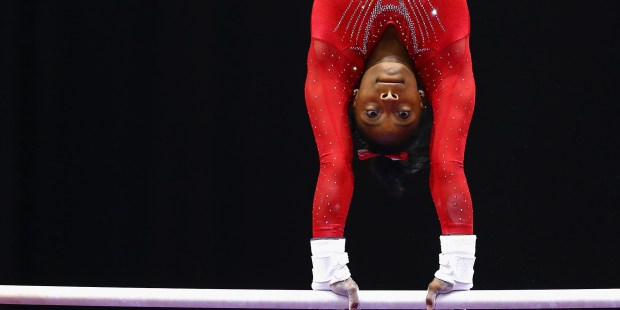 …and to pray her Rosary, too!

Simone Biles has quickly become the favorite to dominate in this year’s gymnastics competitions in Rio. Her routines are nearly flawless and everyone has been in awe of her amazing skill and collected demeanor, barely flinching under the immense pressure of the judges.

What is it that drives her to be the best?

To answer that question, Us magazine recently asked Biles to empty her gymnastics bag in hopes of finding a secret formula to her success. While most of the contents of her bag were no surprise, the reporter noticed a white rosary that fell out. Biles explained, “My mom, Nellie, got me a rosary at church. I don’t use it to pray before a competition. I’ll just pray normally to myself, but I have it there in case.”

Faith has been one of the only constants in her rather difficult life. Biles was born in Ohio to a mother who was battling drug and alcohol abuse and at the age of three she was taken away from her mother. A social worker called her grandparents in Texas who willingly took her in and eventually adopted Biles and her younger sister, “Go ahead and send the kids to us…I didn’t want them to be raised by a stranger.”

Biles now calls her grandparents “mom and dad,” and attends Sunday Mass with them. They have been a big influence in her life and have supported her from the very beginning.

At the age of 6, Biles was introduced to gymnastics and has never stopped since. Her adoptive parents noticed her interest and talent in the sport, remarking in an interview with the Washington Post, “she always had loved bouncing on furniture in the house, so much so that her mother, Nellie, had grown weary of harping that the sofa and chairs weren’t a playground.”

By middle school she started to focus all of her energy on gymnastics, which meant she had to train at least 32 hours a week. This forced her to make the decision to choose homeschooling to allow her the freedom she needed. It was a choice that her mother left up to her, saying, “‘Whatever choice you make, I will support you…But you have to make that decision; it cannot be me because this is really a change in your life.’”

Since devoting herself entirely to gymnastics, Biles’ success hasn’t stopped. According to the New York Post, “She has won the last four U.S. titles and last three world all-around crowns. In the last three years, Biles has claimed 14 World Championship medals, 10 of them gold — both records. She hasn’t lost an all-around competition since August 2013.”

There have been many costs to being a rising star in gymnastics, but her parents have supported her throughout. Her mother said, “It requires a lot of dedication, a lot of sacrifices, and as parents we gave up a lot. We canceled vacations. Our vacations were traveling with Simone [for competitions]. It’s been a sacrifice on our part, because this is something our daughter enjoys and is passionate about. We’re willing to go on this journey with her.”

As the Rio games begin, Biles will likely win gold and her family will be there supporting her every step of the way. With a firm foundation of faith and family, Biles has all she needs to be successful both on the floor and in life.