“I can’t fix this…”: A male caregiver’s lament 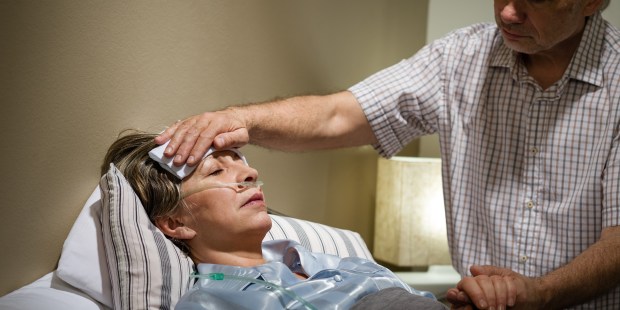 Writing at Aleteia’s For Her, Catherine Kauder offers nine suggestions for things caregivers can do to give themselves a break from a tremendously demanding job that tests their physical, emotional, and spiritual strength to its limits. Her ideas are practical, helpful, and on target.

Just one thing, though: Kauder’s proposals, as you’d expect in a piece written for women, is targeted at them. And 44% of the 54 million Americans giving care to an elderly, disabled, or chronically ill family member or friend are men. I am one of them.

Much that Kauder says—pray, meditate or read to provide respite for your mind, accept offers by friends and neighbors to run errands or otherwise lend a hand, get some exercise, and so on—fits caregivers of both sexes. But here as in other areas of life, the real differences between the sexes also need to be recognized.

One difference where male caregivers are concerned resides in the fact that by their training or their genes, men are conditioned to be problem solvers. That isn’t to say women don’t solve problems, too—of course they do. The difference concerns the approach, the methodology.

Men tend to be analytical, women tend to be intuitive. It isn’t either/or—most people are a mix of both. But in men the emphasis is on analyzing problems in order to solve them while women, having discerned a problem, are likely to intuit what needs doing of a moment. This is not a matter of one approach being right and the other wrong. Complementarity is the rule here as in so much else.

It is in considering the instinct to solve that, I think, we wade into deep waters.

Some years ago, preparing to write a book about suffering and the problem of evil (the book got written—its title is Does Suffering Make Sense? and it’s available from Scepter Press), among the many books I read were two by Christian apologist C.S. Lewis: The Problem of Pain and A Grief Observed.

I didn’t like The Problem of Pain, although I don’t doubt many readers find it helpful. For me, it was just too pat. Lewis sets out to absolve God of blame for the fact that human beings suffer a lot; he marshals his arguments neatly and logically, and when he’s done you can almost hear him say, “I’ve made my case, so stop your complaining.”

A Grief Observed is very different It is in the form of a journal kept by Lewis after the death of his wife, Joy, whom he married fairly late in life, deeply loved, and missed intensely. No pat answers here. The author wants to tell the world that his pain is excruciating. And not only that—this devout Christian doesn’t hesitate to reproach God for it. By the end of the book he reaches some sort of shaky resolution, but by no means has the pain vanished.

The Problem of Pain is an analytical book, competently done but in the end not very persuasive. A Grief Observed is a painfully truthful account by a man hurting deeply and at the end is still struggling to find an answer to the question: Why?

This is the same question many caregivers—and certainly those who are men—struggle with day in and day out: Why me? Why us? Why does God let this happen?

The answer, to the extent there is one, has to be partly analytical and partly intuitive.

Analytical in the sense that one comes to see what the problem is and defines the question—why?—in reasonably clear terms.

Intuitive because the answer, inescapably provisional and incomplete here and now, may not be easy for problem-solving male caregivers to take in. Recently I came across a passage from St. Catherine of Siena that expresses it as well as any I’ve ever seen:

Everything that has being comes from God. Nothing, therefore, that happens to us—trouble or temptation or injury or torment or slander or anything else that could possibly happen to us—can or will disturb us. Rather, we are content and hold these things in reverence, reflecting that they come from God and are given to us as good favors, not out of hatred but out of love.

In a beautiful document which St. John Paul II published in 1984 (Salvifici Doloris—The Christian Meaning of Suffering) and which I used as the starting point for my book on suffering, the pope provided an extended meditation on a further thought drawn from St. Paul’s letter to the Colossians: “What is lacking of the sufferings of Christ I fill up in my flesh for his body, which is the Church” (1:24). The meaning of human suffering can be found in suffering as participation in the Passion of Christ.

In case you wonder, I’m still working on that answer—analytically and intuitively.