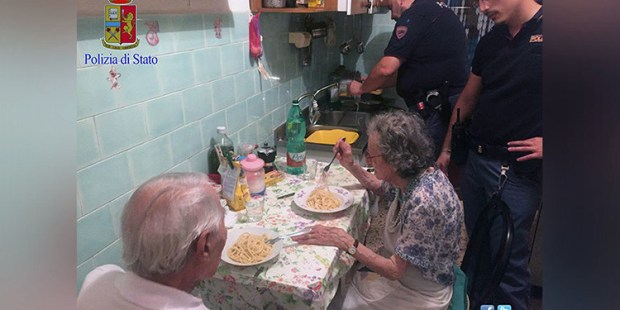 Our world is increasingly busy but also increasingly isolating; one elderly couple’s loneliness became heavier than they could bear

Can loneliness and hopelessness lead us into a pain so real that we must cry out? This story out of Italy suggests that it may be so, and too that simple things like a plate of pasta and a bit of companionship – the gift of “presence” to others – may be fundamental to a healthy society.

It happened in the Appio neighborhood of Rome: authorities were called because neighbors heard cries and other sounds of distress coming from one apartment, and worried that something criminal might be afoot. When police arrived, they found no crime scene, but an elderly couple, Jole, aged 89, and her husband, Michele, 94 experiencing a sense of lonely despair so desperate it brought them to wailing.

Their anguish, the couple explained, had come about from a combination of isolation and the headlines. With many neighbors vacationing, Jole and Michele – who have been married for 71 years — said they had had no visitors for months. The silence of the neighborhood, combined with the harrowing news they were seeing on television, deepened their sense of vulnerability and seclusion, until the couple were literally crying out in desolation.

To insure that the elderly man and woman were well, police called paramedics to look them over; as they waited, an officer named Andrea checked the couple’s cupboards to gauge their food supply and decided to cook a bowl of buttered pasta and cheese for them. While Jole and Michele ate, the other officers, Alessandro, Ernesto and Mirko, kept them company and chatted casually.

Roman police said, “There wasn’t a crime. Jole and Michele were not victims of a scam, as can often happen to the elderly, and no burglar was in the house. There was no one in danger. This time, there was a more difficult job to see to, because there were two lonely souls to reassure.”  The officers managed it with simple food that police said contained “one important ingredient: humanity.”

What the police in Rome did for this couple — and what this New Jersey police detective did for some underprivileged kids — falls right in line with one of the most important lessons that Pope Benedict XVI gave us:

Man is that strange creature that needs not just physical birth but also appreciation if he is to subsist . . . If an individual is to accept himself, someone must say to him: “It is good that you exist” – must say it, not with words, but with that act of the entire being that we call love. – Principles of Catholic Theology

Police are bound “to protect and serve.” These officers just served all of us with a reminder that a willingness to be present to others, and not so turned in on ourselves, might be what makes a difference between a society that has hope and wants to live, and one that – desperate and lonely – cannot go on.

In a related story over at The Daily Catch, one assisted-living facility has come up with a unique way to bring some companionship and human interaction to the elderly. It gives college students free housing, in exchange for their time and presence to the residents.

…students live at the nursing home in small, rent-free apartments in exchange for a minimum of 30 hours a month of acting as “good neighbors”…fun and easy stuff including watching sports, celebrating birthdays, playing games, and just being there when an elderly resident is sick. All of the activities – especially the last one – help keep feelings of loneliness to a minimum.

Keeping loneliness to a minimum; a little company, a little time.

Watch the video, here. This too calls to mind the power of the message “It is good that you exist.”

Without hearing those six words and communicating them back to someone else with our attention and presence, we’re left with nothing but an aching void that leaves us wondering why we should go on; leaves us thinking — as Loretta did in Moonstruck, “Otherwise, you know, what, what good is this stupid life that God gave us, I mean, for what? Are you listening to me?”