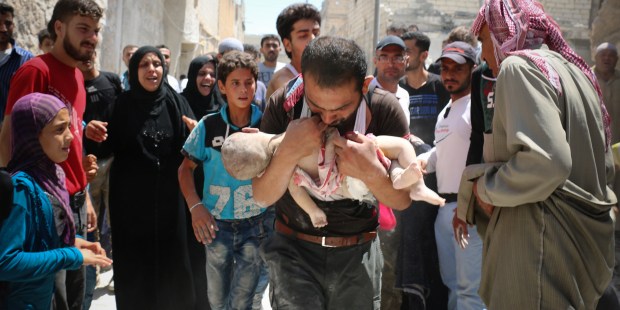 AFP PHOTO / AMEER ALHALBI
A Syrian man holds the body of his child after it was taken from under the rubble of destroyed buildings following a reported air strike on the rebel-held neighbourhood of al-Marjah in the northern city of Aleppo, on July 24, 2016.
Air raids have hit four makeshift hospitals in Syria's battered Aleppo city, doctors said, jeopardising medical care for more than 200,000 desperate civilians in rebel-held areas. The bombardment since July 23 has worsened the plight of residents of besieged eastern neighbourhoods of Syria's second city, where food and medical supplies are becoming increasingly scarce.

A Catholic monastery in Syria has sent out an urgent plea for doctors and surgeons to come to the aid of besieged citizens feeling the brunt of a devastating battle for the city of Aleppo.

Father Daniel Maes, a Belgian priest who lives at the Monastery of St. James in the Damascus desert, recorded a YouTube appeal in French for physicians to come to a mobile clinic the monastery established five months ago near Aleppo.

“There are no more doctors” in the clinic, he said.

In an accompanying note that described the dire situation in Aleppo, where the government forces are fighting rebels, Mother Agnes Mariam of the Cross, one of the superiors of the monastery, said that all volunteer doctors are welcome, though American physicians may have a more difficult time getting a visa.

The sixth-century Monastery of St. James (Mar Yakub in Arabic), which is 90 km north of Damascus and 15 km east of the Lebanese border, was restored in the 1990s. It is home to a new Melkite Greek Catholic community of monks that calls itself The Unity of Antioch. It has assisted the local population during the five-year-old Syrian civil war, itself once surviving heavy bombardment of the town of Qara. One of its monks, an American named Brother David Johnson, was briefly held by terrorists.

The UN said Tuesday that two million people in Aleppo lack access to running water because of escalated fighting. The international agency asked combatants to declare a humanitarian pause to permit emergency deliveries of aid and to fix damaged pumps.

“The U.N. stands ready to assist the civilian population of Aleppo, a city now united in its suffering,” said a statement. “At a minimum, the U.N. requires a full-fledged cease-fire or weekly 48-hour humanitarian pauses to reach the millions of people in need throughout Aleppo and replenish the food and medicine stocks, which are running dangerously low.”

On Wednesday, Russia said there would be daily three-hour ceasefires in Aleppo starting Thursday to allow humanitarian convoys to enter the city safely.

Pope Francis recently renewed his condemnation of violence and his call for peace in Syria.

“It is unacceptable that so many defenseless persons—among them many small children—must pay the price for conflict, for the closure of the hearts and the want of a will for peace among the powerful,” the pope said in his Aug. 7 Angelus address, specifically referring to the crisis in Aleppo.