Olympic swimmer Missy Franklin: Accepting the good and the bad from God 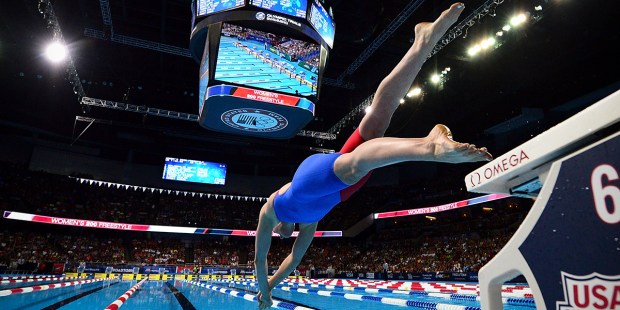 This year faith has taken center stage at the Olympics, and with all the news articles about successful athletes who take their faith seriously you might get the impression that a strong faith in God naturally leads to a gold medal.

Experience teaches us that often the reverse is true. Take Job for example; ask him if his steadfast faith was constantly rewarded with earthly glory.

Or ask Missy Franklin, the breakout star of the 2012 Olympics who won four gold medals and one bronze in London, becoming “one of America’s new sweethearts.” Franklin is well known for her strong Christian faith, having attended Regis Jesuit High School in Aurora, Colorado.

She told Catholic News Service, “My experiences at Regis Jesuit have absolutely impacted my spiritual life, in so many ways. I am considering converting to Catholicism; I’m currently Protestant… Going into Regis Jesuit, my faith was not a very big aspect of my life. Taking my first theology classes, going to my first Masses, going on my first retreats, I began to realize how important God is in my life and how much I love him and need him.”

In an interview with BeliefNet she further explained her time at the Catholic high school, “One of my favorite times is going to our beautiful school chapel and spending time with God… I attended Kairos with my Regis Jesuit sisters and it changed my life forever. I now really work on keeping my faith strong.” Franklin also related how she would pray to God before and after races, asking him for guidance.

Most recently she retweeted a picture of members of the USA Olympic swim team with Protestant evangelical Louie Giglio thanking him for leading the team in devotions. She also posted on Instagram about Bible studies she attended on her 21st birthday.

Some people might think Missy’s strong faith must have helped her win another four more gold medals in Rio. How did she do?

She told Good Morning America, “By far, it’s been the most disappointed I’ve ever been in any athletic performance, so for that to line up at the Olympics is not ideal, obviously… But, you know, that positivity just comes from knowing that I did the best that I possibly could and it just wasn’t my week… It’s heartbreaking that all the hard work and sacrifices I made just didn’t show up, but I know that they will eventually and I think I’m going to be so much stronger after this experience.”

Franklin shows us that faith can also help a person see the big picture when it appears that God is no longer present. She was able to see through the poor performances and recognize that the losses will make her “much stronger” in the long run. Faith gives a person a proper perspective on life.

Trusting in the Lord that something BEAUTIFUL will come out of this, and that I will come back stronger than ever! pic.twitter.com/Bi5NmbAM83

She is planning to recommit herself to swimming and hopes to give her all in 2020.

In the end, the deep religious convictions of the Olympic athletes this year attest to the reality that faith helps a person in times of both success and failure. God is present in the good and bad in life, and teaches us to accept both as gifts for his greater glory.