How did Rio’s “Christ the Redeemer” statue get there? 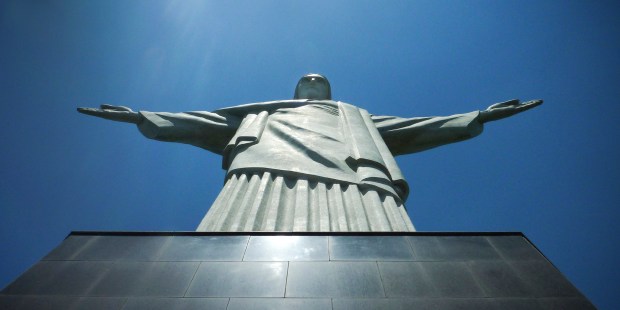 One of the New Seven Wonders of the World, it was built to stem the tide of godlessness

If you have been watching the Olympics this year, odds are you have seen the famous “Christ the Redeemer” statue that overlooks the city of Rio. It is listed as one of the “New Seven Wonders of the World” and has become one of Brazil’s most famous landmarks. Measuring 124 feet tall with an arm span of 92 feet wide, it is almost as big as the Statue of Liberty.

But how did it get up there in the first place?

According to the BBC, in the early 20th century a local group in Rio called the Catholic Circle saw a need to reclaim the city for Christ.

“In the wake of World War One, [Catholic Circle] feared an advancing tide of godlessness. Church and state had been separated when Brazil became a republic at the end of the previous century, and they saw the statue as a way of reclaiming Rio – then Brazil’s capital city – for Christianity.”

The project was then taken up by the Archdiocese of Rio, which proposed it, and a petition was created to convince the president to allow it to take shape.

After it was approved, the group brainstormed various ideas and locations, finally deciding on the summit of Corcovado. Brazilian engineer Heitor da Silva Costa had a grandiose plan for the statue and wanted it to be a worthy monument to Jesus Christ.

“The statue of the divine savior shall be the first image to emerge from the obscurity in which the earth is plunged and to receive the salute of the star of the day which, after surrounding it with its radiant luminosity, shall build at sunset around its head a halo fit for the Man-God.”

In order for the statue to be visible, da Silva Costa knew it had to be big and he needed help to realize his idea. He teamed up with Polish-French sculptor Paul Landowski, who created a clay statue that was shipped and reproduced in Rio using concrete.

At first da Silva Costa did not like the use of concrete to create the Art Deco statue, but eventually agreed to it, using soapstone for the exterior layers.

A host of workers started construction on the massive statue in 1922 and completed it in 1931. It was built using metal scaffolding and cranes with the materials being carried up the mountain by railway.

The statue was officially opened to visitors on October 12, 1931, and in 2006 the Archbishop of Rio consecrated a chapel on the 75th anniversary of the statue’s opening.

In 2010 the government undertook a massive restoration of the statue due to the many years of damage and lightning strikes that disfigured the statue in recent years.

At the start of the Olympic games the Olympic torch was blessed by Cardinal Orani Tempesta at the foot of the statue. While not officially sanctioned by the Olympic Committee, the mayor of Rio requested the blessing. Father Omar Raposo, rector at the Christ the Redeemer Sanctuary, said, “The Christ, with his open arms, welcomes and protects all the peoples of the world, but Brazilians hope that the luck transmitted by the statue will remain with our Brazilian athletes.”

It is estimated that up to 10,000 visitors per day of the Olympics will visit the statue.