Muslim journalist says she will defend Christians and Jews from evil, in order to be truly Muslim 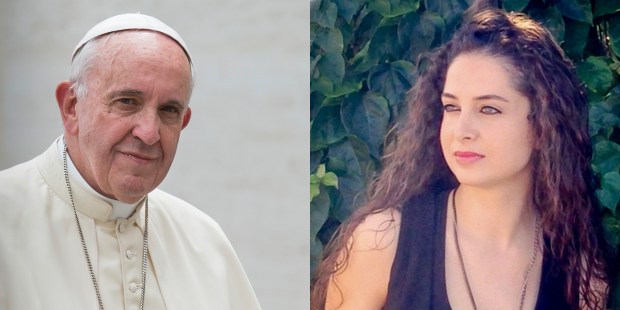 Accused of blasphemy, she hopes to meet Pope Francis in Rome to thank him for respecting Muslims

After the Al Qaa explosions in Lebanon, Mahassen Haddara, a Muslim journalist from that country posted to her Facebook page, “Say Allah! I will carry my Islam and go to al Qaa because my Christianity is calling… Let’s all go!”

After the murder of Fr. Jacques Hamel, she posted this prayer:

“Virgin Mary, don’t be late! Christ, don’t be late! Virgin Mary, Lady of the women of the world, we beg you to speed up the coming of the Christ, because we cannot handle it anymore… Our land from Jerusalem to Iraq is suffering… our churches and mosques are desecrated… our priest was killed yesterday…our children are being killed… and we are hopeless”.

Aleteia followed, and then translated, the posts of Haddara, remarkable in that they were the messages to the world, written with passion by a Muslim from the tortured Middle East. Our story spurred additional coverage on Mexican television and elsewhere. Her message startled some, who asked her to verify her words; not surprisingly, the internet being what it is, it has also led to intimidation tactics by some, but Haddara is digging in on her sentiments, writing on her page,

“I received yesterday messages from the United States and the European Union asking about the authenticity of my words, as an Arab Muslim, concerning peace among religions.. .my answer was: ‘Yes, I am a Muslim girl carrying peace to the world.'”

Haddara said that having her message translated to English means its reach has expanded widely, “my message inviting to dialogue and peace among religions and people knocked on all doors, and was welcomed.. .and that is how we can defeat evil and war.”

During an interview with Aleteia’s Arabic edition, Haddara said, “Terrorism is striking at the seeds of humanity and [has] ripped the geographical boundaries…I scream, in the face of terrorism, and say: ‘In the name of humanity and celestial books: the Torah, the Bible and the Quran! I will defend Judaism if Judaism is oppressed, and I will protect Christianity from all evil, [so that I may] feel that I am a true Muslim! I will hold this stance as an Arab Muslim woman and will face this war defending humanity through my pen and my voice.’”

Haddara offered, “I used to think that the most important achievement reached by mankind in the 21st century was the Charter of the United Nations but Pope Francis’ last intervention [on the papal plane returning from Poland] went beyond all what that has been said during the last century, as — in front of the Christians — he blessed with his words the Muslims by saying: I believe that in almost all religions, there is a small group of extremists” and he added: “If I want to talk about Muslim violence, I should therefore talk about Christian violence…not all Muslims are violent.”

She expressed gratitude to Aleteia, “for publishing my note and for being keen on building a bridge of peace and dialogue between Muslims and Christians, and change the distorted image of Muslims in the world because of extremism and terrorism. I knew that God responded to my prayers and wiped my tears and made me reach the world thanks to the website, and I send all my greetings to Aleteia’s staff wherever they are.”

Haddara concluded by addressing a question about threats and harsh rebuttals, saying: “It is true that I was exposed to unjust threats and accused of blasphemy but nothing can be louder than the voice of justice and God’s will. I will continue my journey with love and peace.”

Aleteia is very grateful for the time Mahassen Haddara took to speak with us, and urges prayers on her behalf, and for all the world.