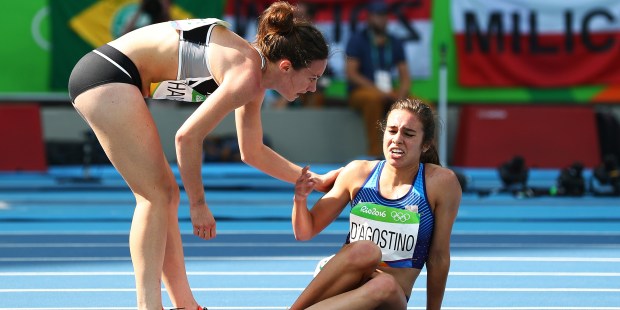 Photo by Ian Walton/Getty Images
RIO DE JANEIRO, BRAZIL - AUGUST 16: Abbey D'Agostino of the United States (R) is assisted by Nikki Hamblin of New Zealand after a collision during the Women's 5000m Round 1 - Heat 2 on Day 11 of the Rio 2016 Olympic Games at the Olympic Stadium on August 16, 2016 in Rio de Janeiro, Brazil. (Photo by Ian Walton/Getty Images)
Share
Print
Philip Kosloski - published on 08/18/16

After colliding into a fellow runner during a 5,000-meter qualifying heat on Tuesday, United States runner Abbey D’Agostino could have kept on running. Her coach even told her before the race, “If you go down…get up, dust [yourself] off, have a quick look around and then get right back to running.” Instead she turned around and helped New Zealander Nikki Hamblin stand up and encouraged her to finish the race, saying, “Get up. We have to finish this.”

Before that moment Hamblin had never met D’Agostino and was shocked by the selfless concern she had in the middle of an Olympic race. Hamblin said later about the encounter, “That girl is the Olympic spirit right there… I’ve never met her before. Like I never met this girl before. And isn’t that just so amazing. Such an amazing woman.”

Hamblin and D’Agostino continued to race together side-by-side, as it turned out D’Agostino was more severely injured than Hamblin and was struggling to finish the race. Hamblin wanted to return the favor and offered encouragement to the grimacing D’Agostino.

Despite running in absolute pain, D’Agostino finished the race behind Hamblin and was taken away in a wheelchair. Both runners were advanced to the final, but after an MRI on Wednesday D’Agostino discovered she had completely torn her ACL and will not be able to run for quite some time.

The awe-inspiring event is being described as the definition of “true Olympic spirit” and a wonderful example of “sportsmanship,” but really it is better described as an expression of D’Agostino’s deep and abiding Christian faith.

She said in a statement to the media, “Although my actions were instinctual at that moment, the only way I can and have rationalized it is that God prepared my heart to respond that way… This whole time here he’s made clear to me that my experience in Rio was going to be about more than my race performance — and as soon as Nikki got up I knew that was it.”

D’Agostino has always been outspoken about her faith in God, sharing it frequently on social media. She credits her faith in being a driving force behind her athletic career, explaining its role in an interview with Julia Hanlon.

“I felt the peace that comes with acknowledging that I’m not going to run this race with my own strength. And I think that acknowledging those fears before God is what allowed me to feel that peace and I was drawn to it and I wanted to know a God who would work that way in my life.”

Meditating on this #tuesdaytruth – we are fearfully and wonderfully made… And it's awe-inspiring.

Besides keeping a rigorous training routine, D’Agostino wakes-up each morning listening to worship music, reading her Bible and journaling about the many graces she has received. Resting on Sunday has also been a big part of her spiritual and physical life, allowing her body to heal and her soul to be lifted up in prayer. She often feels God’s presence while she runs and it pushes her forward to do her best.

D’Agostino’s simple act of kindness will not earn her any Olympic medals and the episode may not be officially transcribed in the record books. Even lining up at the starting line on Friday would have given her a standing ovation by the crowd, but she won’t be afforded that spotlight because of her injury. However, her self-sacrificing act of charity will continue to inspire the world for years to come; it will endure much longer in the hearts of all than the gold medals that are given out that night.

In the end, D’Agostino shows the world that winning isn’t everything. As Mother Teresa once said, “God does not require that we be successful, only that we be faithful.”