“It is fitting that we should die for him”: Remembering the 813 martyred shopkeepers of Otranto 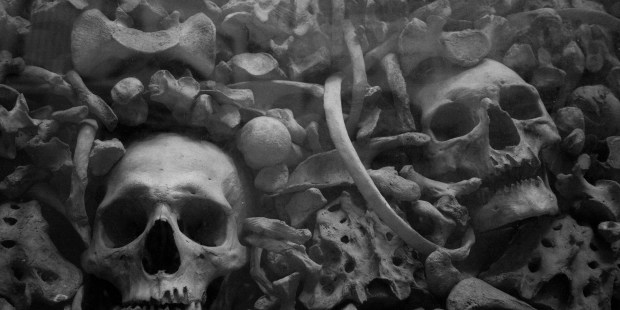 In the face of a surprise Ottoman attack, their courageous witness preceded the “Hour of the Laity” by a millennium

In Italy, the land of superstars such as Michelangelo and Machiavelli, St. Clare and Thomas Aquinas, Christopher Columbus and Galileo, it is easy for the little guys to get lost. The 813 martyred shopkeepers and artisans of Otranto, towards the heel of southern Italy, are one example of this odd obscurity. The announcement of their canonization on Feb. 11, 2013 (five hundred years after their death) was overshadowed by another big revelation – the resignation of Pope Benedict XVI. Even last Sunday, as their feast fell on the Lord’s day with the Assumption hard on its heels, the martyrs of Otranto risked being lost in the fray.

The courageous witness of these men, however, anticipated what the Second Vatican Council would call the “Hour of the Laity” and the “universal call to holiness” by a half millennium. Arguably, the 813 martyrs of Otranto may well be the most important examples for our era.

The town of Otranto lies on the edge of the Adriatic Sea, well placed for trade throughout the Mediterranean. In the 15th century, it was a thriving center with walls meant more for customs duties than defense. Its estimated 6,000 inhabitants were made up of families with a small garrison of 400 Aragonese soldiers for nominal protection.

After the fall of Constantinople (modern-day Istanbul) in 1453, the Ottoman Turks turned their attention to Italy, the heart of Christendom. Sultan Mehmet II the conqueror had taken the name Kayser-i Rûm (Caesar of Rome), one indication of his plan to ultimately conquer the See of Peter.

At the end of July 1480, the Sultan attacked Rhodes, held by the Knights of Malta. The resistance of the knights so riveted the eyes of the world that no one noticed the second, larger force sent into the Adriatic. On July 29, 1480, the Hydruntii, as the inhabitants of Otranto were called, stared aghast as the fleet carrying 18,000 Turkish troops entered their harbor.

The people and their protectors, led by Captain Francesco Zurlo, put up a mighty resistance hoping that the Aragonese might come to their aid, but after two weeks, on August 11, the invaders overran the city. Zurlo and those few soldiers who had not run away were killed immediately, while Archbishop Stefano Pendinelli was beheaded while celebrating Mass.

The population, already decimated, was left without spiritual, military or political leaders to guide them, and were rounded up before the commander of the Ottoman forces Gedik Ahmed Pasha. The women and children, already severely abused, were chained and prepared for transport as slaves. The men watched powerlessly as their wives, children, sisters and mothers were herded like cattle, and their captors offered them the chance to free them by converting to Islam.

There was no archbishop to rally the men to Christ and no diplomat to open negotiations; there were just shoemakers and leather tanners and apprentices who had been trying to make a living until this terror had descended upon them. But one man, Antonio Primaldo, a local tailor, rose and said “Now it is time for us to fight to save our souls for the Lord. And since he died on the cross for us, it is fitting that we should die for him.” A simple, decisive statement, which every man in Otranto echoed. On August 14, the laymen of Otranto, from the age of 15 upwards, were led to the Hill of Minerva outside the town. There, starting with Antonio Primaldo, the 813 men were beheaded one by one. The lifeless body of Antonio remained standing until the last man had died, rallying his brothers in Christ even in death. That day, the Hill of Minerva became the Hill of the Martyrs.

The Italian peninsula had been enmeshed in internal skirmishes–Florence versus Naples versus the Papal States—but the shocking Muslim attack on Otranto, the horrendous loss of life in the siege, the enslavement of 1,500 Christian women and children, and especially the witness of the martyrs, shamed the crowned heads of Italy to finally combat this implacable enemy. With a foothold in Italy, the Pasha promised he would have his troops at the tomb of Peter before the year was out.

The bodies of the men were not discovered until a year later when Otranto was retaken. Cardinal Pietro Colonna, the papal legate, was among the first to find the remains. He claimed they were intact and “their faces were happy, as if they were laughing.”

Alphonse of Aragon, the nominal ruler of Otranto, brought 240 bodies back to Naples. The remainder are kept in the beautiful cathedral of Otranto, fittingly across the 700-foot mosaic of the tree of life that covers the floor. The images of harvests and time cycles lead to their chapel, discreetly nestled to the right of the altar, where those who have passed beyond our space and time share in glorious eternity.

The process of canonical recognition has not been the fastest. The first chance at beatification in 1481 saw them passed over in favor of the Franciscan friars martyred in Morocco in 1220. Their cause wasn’t opened until 1539 and they were finally beatified in 1771 in a startlingly clairvoyant preparation for the countless martyrdoms that would come about during the French revolution.

On May 13, 2013, Pope Francis canonized the Martyrs of Otranto, in an age when the “people of the cross” are slaughtered on the beaches on Libya, massacred in their churches and attacked as unexpectedly as the townspeople of Otranto on that July morning in 1480.

The responsibility for witness was clear to Antonio Primaldi and his companions. This is what it means to be the Catholic laity—to know our faith and to be willing to show the world how we emulate Jesus on the cross, even if, as in the case of the martyrs of Otranto, there is no fanfare for our witness.