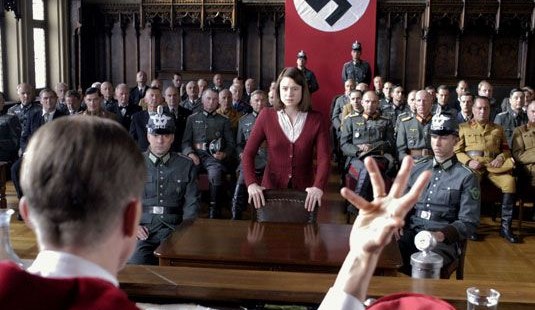 Asked to file away young rebel’s case, Brunhilde Pomsel went on doing her job and never noticed the storm brewing

A secretary to a high-ranking official in Adolf Hitler’s government recalls in a new film the fleeting encounter she had with the case of Sophie Scholl, a leader in the resistance movement in 1940s Germany.

Brunhilde Pomsel, now 105, is the subject of A German Life, a film based on more than 30 hours of conversation with her. She reflects on her time more than 70 years ago when she served as a secretary to Nazi propaganda minister Joseph Goebbels.

Her job included “massaging downwards statistics about fallen soldiers, as well as exaggerating the number of rapes of German women by the Red Army,” according to the Guardian newspaper.

But she asserts that she did little more than type in Goebbels’ office and did not know what was going on beyond that. She says she did not learn about the Holocaust until after the war.

Pomsel told the Guardian’s Kate Connolly about being handed the case file of anti-Nazi student Sophie Scholl, who was executed for high treason in 1943 after distributing anti-war leaflets at the University of Munich.

“I was told by one of Goebbels’ special advisers to put it in the safe, and not to look at it,” she said. “So I didn’t, and was quite pleased with myself that he trusted me, and that my keenness to honor that trust was stronger than my curiosity to open that file.”

Scholl’s story has been told numerous times, including the 2005 film Sophie Scholl: The Final Days. She was active in the White Rose resistance movement. A 2009 article in the Catholic Herald pointed out that Scholl was deeply influenced by English theologian Cardinal John Henry Newman.

Behind her heroism was the “theology of conscience” expounded by Cardinal Newman, according to Professor Günther Biemer, the leading German interpreter of Newman, and Jakob Knab, an expert on the life of Sophie Scholl.

After her arrest, Scholl told the Gestapo that she had been compelled by her Christian conscience to peacefully oppose Nazism. She and her brother Hans asked to be received into the Catholic Church an hour before they were executed but were dissuaded by their pastor, who argued that such a decision would upset their Lutheran mother.

For her part, Pomsel seems to have no regrets for just doing her job, but she hopes that the world will learn from Germany’s tragic history.

“I just cling to the hope that the world doesn’t turn upside down again as it did then,” she said, “though there have been some ghastly developments, haven’t there?”