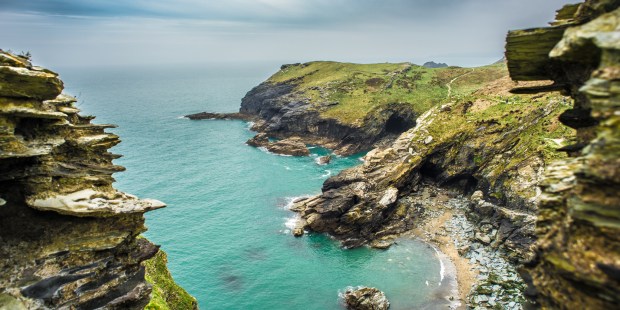 Shards suggest imported wine from Anatolia, oil from the Aegean

Recent archaeological findings at the site of a castle in England have not confirmed the existence of the legendary King Arthur, but have shed light on what life might have been like during his lifetime if he had indeed existed.

Members of the upper crust in England then were by no means isolated from the Continent. Indeed, they enjoyed wine from Turkey and oil from Greece, the findings strongly suggest.

Archaeologists discovered remains of a what may be a royal palace at Tintagel in Cornwall, the site most strongly related to King Arthur (he is said to have been conceived there through the illicit union of a British King and the beautiful wife of a local ruler). It is likely that the one-meter thick walls being unearthed are those of the main residence of the 6th century rulers of an ancient south-west British kingdom known as Dusnonia, The Independent reported.

The palace appears to date from the 5th and 6th centuries, the time of King Arthur, according to tradition. The Independent report is tantalizing:

What the archaeologists have found is of major historical significance – irrespective of the veracity of any Arthurian connection. It’s the first time in Britain that really substantial buildings from the 5th and 6th centuries – the very heart of the Dark Ages – have been found. So far the excavations have revealed massive metre-thick masonry walls, steps and well-made slate flagstone floors. …

The people who lived in these well-constructed buildings appear to have been of elite status. The archaeological evidence – scores of fragments of pottery and glass – show that they were enjoying wine from what is now western Turkey and olive oil from the Greek Aegean and what is now Tunisia. What’s more, they ate their food from fine bowls and plates imported from western Turkey and North Africa, while they drank their wine from the very finest, beautifully painted French-made glass cups.

That would be possible, of course, because part of Great Britain had been part of the Roman Empire. The Romans abandoned Britain in 410, though, and lost Western Europe to Germanic barbarian invaders by 476.

“The discovery of high-status buildings—potentially a royal palace complex—at Tintagel is transforming our understanding of the site. It is helping to reveal an intriguing picture of what life was like in a place of such importance in the historically little-known centuries following the collapse of Roman administration in Britain,” said Win Scutt, English Heritage’s properties curator for the West of England.