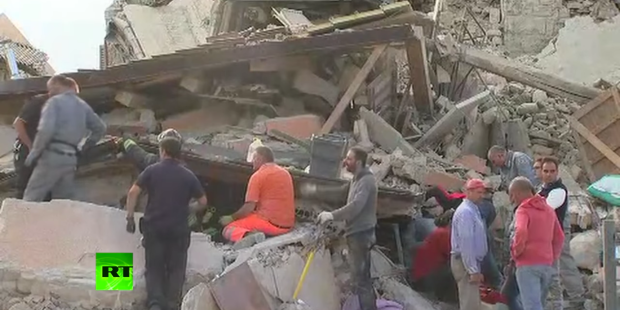 Eyewitness report: “All knelt and received the blessing after we sang the Salve Regina through another aftershock.”

A devastating earthquake struck central Italy early Wednesday, crippling the regions of Umbria, Lazio and Marche. According to the New York Times, 73 people were killed and at least 100 were injured.

Among the cities hit by the 6.2-magnitude earthquake was Norcia, birthplace of Saint Benedict and Saint Scholastica, and home to a Benedictine monastery that is famous for their Birra Nursia and hit recordings of Gregorian Chants. Re-established in 1998 by a group of American monks, the monastery has been thriving, and recently began to experiment with different ways to support their way of life.

The monks posted an update on Facebook to reassure everyone that they are okay, but also that they need prayers and donations to help repair the damage.

Many of you have by now heard of the earthquake that struck us during the night. The quake was a powerful one with a magnitude of 6.2. We’ve taken the past few hours to assess the situation.

First: We are OK. We are alive, and the monks were not seriously injured. Sadly, there are many injuries to report among the people of the region, especially those in small mountain villages. Please pray for them. We monks will do what we can to contribute here on the ground, but we’ll need your spiritual support in a special way during this period.

Second: We, as many others in Norcia and surrounding areas, suffered a lot of damage to our buildings and especially to our basilica. It will take some time to assess the extent of the damage, but it is very sad to see the many beautiful restorations we’ve made to St. Benedict’s birthplace reduced, in a moment, to disrepair.

The Monks of Norcia”

A few hours later the monks posted an additional update that as a precautionary measure they will be moving to the international Benedictine headquarters at St. Anselmo in Rome. During this time two monks will remain in Norcia to keep watch over their monastery until they are able to rebuild.

Hilary White, local resident and friend of the monastery, gave an eyewitness account of the earthquake on her blog. She wrote of the damage: “Generally, the older the house, the better it held up. My friend’s house in town, where I’m using her wifi, was built originally as a monastery in the 15th century and there’s not a single crack anywhere, and only a few broken glasses on the floor. Houses built in the 20th and 21st centuries range from visibly damaged to uninhabitable.” Many of the area roads were damaged and has made it difficult for emergency vehicles to reach remote villages.

Inside the monastery and Basilica plaster was all over the floor and the monks were advised to stay outside in case of an aftershock. While out in the piazza, the monks were notified that “Amatrice just reported 22 dead and the town ‘no longer there.’” White described the sobering scene, writing, “We all stood in a large circle as Fr. Cassian, seated on the steps at the base of St. Benedict’s statue, started the prayers [of the rosary] in Latin. A number of people joined us, young and old. A girl about 17 was standing next to me, wrapped up in a blanket under her boyfriend’s arm. Both were praying the old Latin prayers. All knelt and received the blessing after we sang the Salve Regina through another aftershock.”

Other cities in the region were more severely damaged, most especially Amatrice, which was almost completely destroyed.

Pope Francis postponed the catechesis of his weekly General Audience to pray for those affected by the earthquake, saying, “on hearing the news of the earthquake that struck central Italy, which has devastated entire areas and left many wounded, I cannot fail to express my heartfelt sorrow and spiritual closeness to all those present in the zones affected.” He then led all those present in praying the Sorrowful Mysteries.

If you would like to help the monks in their rebuilding project, you may find instructions on how to donate on their website.