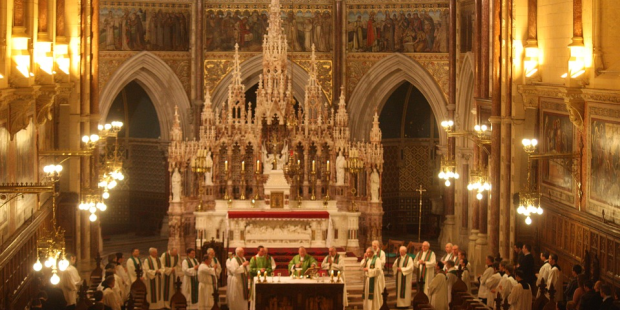 The book of Evangelical Protestant apologetics sitting on the thrift store shelf looked interesting, because the author starts off describing a dinner with the famous atheist Christopher Hitchens. At the dinner, Hitchens criticizes Christianity by pointing to Christians behaving badly.

The writer counters by telling him that the real question is “What does the Bible say?” He writes: “The idea of the Bible as the sole arbiter of what distinguishes authentic Christianity from counterfeit versions of it, a concept as old as Christianity itself, left him dumbfounded.”

I will try to say this politely: Even if that claim did dumbfound Hitchens, and I have my doubts, it isn’t just wrong, it’s ridiculous. American Catholics enjoy a growing friendship with Evangelical Protestants, and that’s great, but sometimes we need to remember how different we are.

These are people I know and love — as it happens, an old colleague from when I taught at an Evangelical Episcopal seminary is coming by in two hours to take me to a Pirates game. But as much as I love and admire them, the difference between our forms of Christianity goes very deep, to the source of our knowledge about what God has told us about himself, about what he’s given us, and about how he wants us to live.

This book gave me one of those reminders of our differences, and not just about the Bible. Much of the book is set in Ukraine and the writer claims that “authentic Christians are but a tiny minority of the population.” By “authentic” he means Evangelical Protestants like him. That’s offensive enough by itself, but it’s especially offensive in a country where the Orthodox and Catholics were brutally persecuted for seven decades by the Soviet communist regime.

Some of those people died for the Faith. Many lost their jobs, their families, any chance at a decent life. They were always in danger. Some went to the horrible prison camps of the Gulag. Now some American who never faced persecution for his faith declares that they and their descendants are not “authentic Christians.” But he is. Words fail me.

But back to his big mistake about Christianity. The book, let me say, is published by a major Evangelical publisher and blurbed by substantial Evangelical figures. The writer’s not a crank. Yet he talks rubbish about the nature of Christianity.

Let’s take the first Pentecost as the beginning of Christianity. The writer would agree to that, I’m sure. The first books of what became the New Testament appeared at least 20 years after Pentecost and the last may have been written more than 60 years later.

In the other words, the Church went on for a long time without the most important part of the Bible. The books literally didn’t exist. The author certainly knows this, yet he claims his idea of Scripture as “the sole arbiter” of real Christianity is “a concept as old as Christianity itself.”

It’s not. Nowhere close. The idea was basically invented 1,500 years after Pentecost, by the creators of Protestantism. No one before that would have described Scripture as “the sole arbiter.” Christians from the first hearers of the Apostles’ letters to the fathers of the late Middle Ages loved Scripture, they trusted Scripture, they read it with great care. But making it the “sole arbiter” of the Faith, no.

As the Church explains it in Dei Verbum, being true to the actual Christian history: “There exists a close connection and communication between sacred tradition and Sacred Scripture. For both of them, flowing from the same divine wellspring . . . form one sacred deposit of the word of God, committed to the Church.”

The early Reformers needed an authority they could use against the Church and the only real option they had for this role was Scripture, with its authority reimagined. They split up what the Church had held together and took the part they could use, which also happened to be the more malleable part.

This new authority had the advantage of being an authority they could interpret in any way they wanted, and of course the early Protestants themselves soon split up over what they claimed it said. After a hundred years or so, they were united only in being “Protestants,” which is to say, people who believed firmly that the Catholic Church was really wrong and almost any other form of Christianity was better.

The Church up and running

The Catholic Church recognizes the obvious fact that the Church was up and running some time before she had any authoritative writings about her new life in Christ. She also knows that God knew what he was doing. Evangelicals like this writer don’t accept the authority of the Church so rewrite her history and deny the inescapable evidence of the nature of the Church.

After the Orthodox, we have no better friends in the Christian world than the Evangelicals. They are becoming steadily less anti-Catholic and more appreciative of Catholicism. Still, we have to remember some of the things they believe are just wrong. An invented history that erases the reality of the Church in favor of Scripture read as “sole arbiter” from the very beginning is one of these things.