Like a moth drawn to the flames of church candles 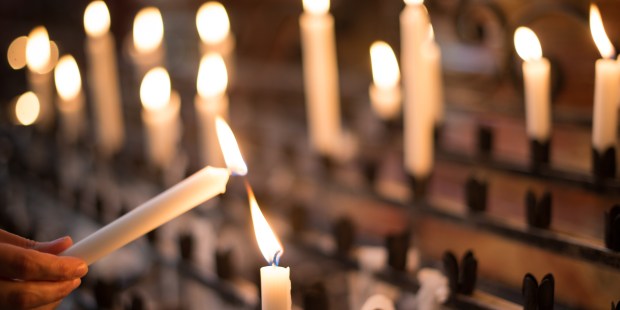 I’ve never been able to stop myself from lighting several of them, emptying my pockets into the donation box, and kneeling to pray with all the saints and souls in Purgatory I can think of

I had only been passing through Sioux Falls, on my way back home to the Black Hills, and my intention was only to stop by the cathedral for a moment to look at the recent restoration work. But whenever I see a bank of votive candles, I feel like a moth drawn to their flames, and I’ve never been able to stop myself from lighting several of them, emptying my pockets into the donation box, and kneeling to pray with all the saints and souls in Purgatory I can think of.

Sioux Falls is a curious town. South Dakota was never thickly populated with Catholics. The first parish church in Sioux Falls, St. Michael’s, was built there only in 1879, with the diocese established in 1889, when the bishop moved his seat from the town of Yankton, 60 miles away. By 1915, however, the Catholics had purchased the top of a hill overlooking the city, and they built on it St. Joseph’s, a towering cathedral that would dominate the Sioux Falls skyline. The bishop at the time, Thomas O’Gorman, was a lifelong friend of Minnesota’s Archbishop Ireland, and like his friend, he understood the usefulness of an almost aggressive assertion of Catholicism into public space. We’re here, St. Joseph’s Cathedral seems to announce, and the future belongs to us.

More to read: 3 Things you might not know about sacramentals

The cathedral underwent some renovation, beginning in 2004, with much of it directed by the architect and Notre Dame professor Duncan Stroik. And since he’s someone whose work I follow (and a friend of my father’s), I wanted to tour the cathedral and see in person what had been accomplished. But once I went inside the cathedral, I got sidetracked, the way I always do, and before long I was kneeling at the side chapel, with a dozen new candles lit.

Sometimes I feel like a Catholic arsonist. I always loved church candles. When I was little they seemed to me almost the definition of what made churches into sacred spaces. And whenever I passed a church, I’d slip in and light a candle to symbolize a prayer I would kneel and make: asking St. Jude for help, if I had lost something, or praying with St. Patrick just because I was in New York, or praying for the dead with a Hail Mary.

I still slip into churches as I pass them, but as the years go by, I find myself lighting even more candles: banks of them. They symbolize the lastingness of the prayers I make for the sick, injured, or grieving friends on my prayer list. But I pray for the dead, too, as though they were all around me: the souls in Purgatory, relatives I never even met, people I love who have slipped away. To be a Catholic is to live in such a populated world, not just the community of the saints in heaven and on the faithful on earth, but with all believers still gathered around us like interested ghosts.

When I stuff all my money through the little slit in the donation box and start lighting candles, I feel their presence. Maybe the most interesting part of my candled prayers is the crowd that I sense joining me. St. Jude, the Little Flower, St. Mark (my birthday’s patron), St. Dismas. But also people I know who have died, together with generation after generation of my family. They congregate around me, and we all pray together.

More to read: Once we met Saint Dymphna, everything changed for the good

Some churches use small candles set in beds of sand. Others use long thin candles encased in red or blue glass. Some—an abomination from the 1970s—use electric light bulbs. But my favorites are the short, stout white ones in red glass cups. They keep burning after I leave, just as my prayers continue, and they provide a locus, a beacon, for the crowds who’ve joined in.

Admittedly, those little candles form only small beacons. But the world they illuminate, as they symbolize our prayers, is not the ordinary one. They’re like flashlights, little torches, that give us glimpses into reality as it actually is. Votive candles shine in a metaphysical way. They reveal, in their small way, how thick this world is: thick with supernatural meaning, thick with spirituality, thick with the communion of saints.

We are also in community with other Catholics when we light those votive candles, of course. As I left the cathedral in Sioux Falls, I noticed a family of summer tourists joining in the prayers, searching for candles I had left unlit. But even more, votive candles are part of the great communion that is a special feature of Catholicism. To light a candle is to symbolize and perpetuate a prayer. And that candle shines into the world of all the saints, and all the dead, and all the faithful. No wonder I can’t pass a church without slipping inside to light some candles.