The king who would be a saint 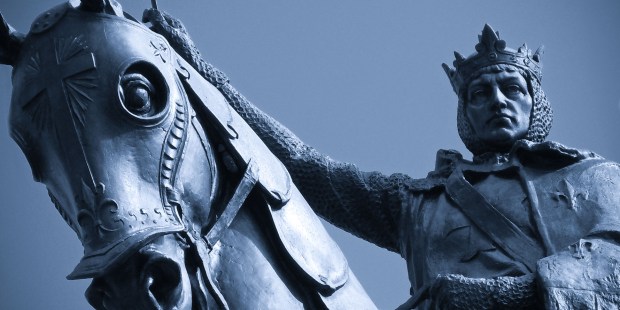 Saint Louis, also known as King Louis IX of France, exemplified the virtue of humility that we hear about in Sunday’s readings

The man who would be known to history simply as “Saint Louis” was born in 1214 and became King of France in 1226, when he was only twelve years old. In 1234, he married Margaret of Provence and the couple eventually had eleven children. Known for his spirit of penance and prayer, King Louis IX was mindful of both the temporal and spiritual needs of his family and people of France. He was and admirer and supporter of Saint Thomas Aquinas and other learned men of his day and, under his rule, France experienced a cultural and spiritual renewal. Louis is also remembered for the construction of La Sainte Chapelle in Paris, a chapel he built to house the relic of the Crown of Thorns.

In 1248, and again in 1270, Louis joined in the Crusades to the Holy Land. It was during his second trip that Louis contracted dysentery.  He died near Tunis on August 25, 1270. His relics were returned France and enshrined at Saint-Denis, where many miracles have been reported. Saint Louis was canonized in 1297 and is honored as a patron saint of France. His liturgical commemoration is celebrated each year on August 25.

Saint Louis understood and lived the admonition we find in this Sunday’s reading from Sirach: “Humble yourself the more, the greater you are, and you will find favor with God. What is too sublime for you, seek not, into things beyond your strength, search not” (3:18, 20). Whether he was serving with his own hands the dozens of poor people who ate at the royal palace each day, endowing churches, religious communities, and schools, or through his dedication to his family, King Louis understood the true relationship between power and humility. This is why he could write to his son and successor, Philip: “Be kindhearted to the poor, the unfortunate, and the afflicted. Give them as much help and consolation as you can. Thank God for all the benefits he has bestowed upon you, that you may be worthy to receive greater. Be just to your subjects, swaying neither to the right nor left, but holding the line of justice.”

Humility is that virtue that allows us to understand who and what we are as God’s children: gifted and broken, struggling and blessed, all equal in the eyes of God. And this Sunday’s Gospel invites us to reflect on humility as Jesus tells us about the banquet of the Kingdom of God (cf. Luke 14:1-14). Each of us, in our own way, is “poor, unfortunate, and afflicted.” And yet, each of us is also invited by God to take our place at the banquet table. It is humility that enables us to discover the foundations of peace and justice that are the hallmarks of God’s Kingdom, present here and now.

And yet, we delude ourselves—as individuals and as nations—when we believe that we have the power or means necessary to end suffering and injustice. Humility demands that we admit our limitations and recognize that, in the end, it is God who governs the world and who grants peace. We, however, must do all we can to instruments of peace and justice. The ongoing conflicts in the Middle East and Africa, the persecution of Christians, the plight of refugees, the murder of the two religious sisters in Mississippi, racism and classism, and the fear and terror that have become such a part of daily life are all reminders that much work remains to be done.

But we can’t lose heart or feel discouraged. Our Scripture passages this Sunday remind us that all the things for which we hope are attainable (cf. the Second Reading). Although we don’t have all the answers or the power to bring peace ourselves, God has endowed each of us with unique gifts and abilities and calls us to work together and use our gifts for the good of others.

In the end, if our hearts are open, we can recognize, as did Saint Louis, where real power and honor are found: in humility and in our willingness to set aside our own status and agendas to place the needs of others before our own.

How is humility a fundamental part of a life of discipleship?

How does this Sunday’s Gospel challenge you? Who do you see missing from the “table”?

What saints or holy women and men do you look to as a model for the Christian life? How do you see the virtue of humility at work in their life?

Words of Wisdom: “Those who are in a position to help others will realize they themselves receive help; being able to help others is no mere achievement on their own. This duty is a grace… We recognize that we are not acting on the basis of any superiority or greater personal efficiency, but because the Lord has graciously enabled us to do so.”—Pope Benedict XVI