Exclusive interview: The priest who made the case for Mother Teresa’s sainthood 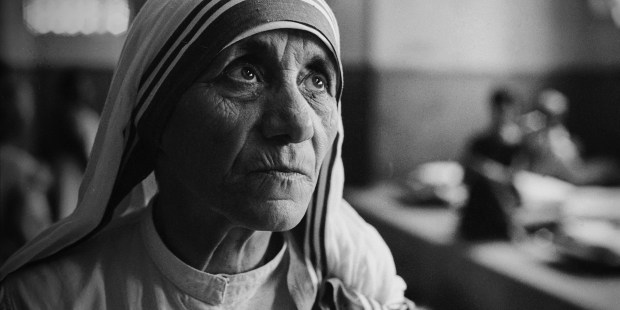 Terry Fincher/Gettyimages
Albanian Roman Catholic nun and founder of the Missionaries of Charity, Mother Teresa (1910 - 1997) at a hospice for the destitute and dying in Kolkata (Calcutta), India, 1969. (Photo by Terry Fincher/Hulton Archive/Getty Images)
Share
Print
John Burger - published on 08/30/16

In a new book based on the writings of Mother Teresa of Calcutta, Father Brian Kolodiejchuk takes a page from Pope Francis and explains the deeper meaning of the word “mercy.”

“Pope Francis tells us that the etymological meaning of the Latin word for mercy—misericordia—“is miseris cor dare, to ‘give the heart to the wretched,’ those in need, those who are suffering,” Father Kolodiejchuk writes in the introduction to A Call to Mercy: Hearts to Love, Hands to Serve. “That is what Jesus did: He opened His heart to the wretchedness of man.”

Perhaps there can be no description that better fits the nun who will be canonized this Sunday than one who gave her heart to the wretched and the miserable. From her base in the most miserable part of a city in India, Mother Teresa spent her entire adult life trying to serve the deepest needs of “the poorest of the poor” around the world.

In editing this book, have you discovered anything new and surprising about Mother Teresa?

As we were going through her writings, it was good to be reminded of all the things that she did. She did a lot in those 87 years that she lived.

Some of those examples are kind of extraordinary, for example, when there’s a conflict between the Hindus and the Muslims, and she’s going to the airport and she comes across a group that’s fighting. Most people would say, “I’m getting out of here because it’s dangerous,” but she stops and gets out and tries to make peace and says, “Don’t you realize you’re brothers, so stop fighting.” So it’s rather extraordinary courage.

But most of the examples in there, if you take the individual actions, most of them are things that anyone can do—they’re small, ordinary things, like visiting a hospital, visiting a patient or holding a baby. There are all kinds of different things that we ourselves can do. Mother Teresa would say “Calcutta is everywhere.” We don’t have to go to Calcutta, necessarily, to find the poor. They’re right around us in our own neighborhood, in our parish, in our community, even in our own family. Who needs that little smile or a little gesture of love, a flower or reading the newspaper (to a shut-in), visiting someone who might be lonely? If we pay attention, if we look for these opportunities, they’re all around us, she would say.

And when you use the term “the poor,” for her that would include not only materially poor but spiritually and emotionally poor, those who feel unloved, as well.

When she speaks that way, yes, it’s in a broader way.

Mother Teresa is being declared a saint just 19 years after her death. Are you surprised that the canonization process has gone so quickly?

Well that’s interesting because people would say since the beatification, “What’s taking so long?” And I would say, “Well, when it’s the right moment for the Church then we’ll have a miracle and then we’ll have the canonization.” And sure enough, the miracle actually happened in 2008, but I didn’t hear about it until September 2013, and that led to the approval last year. So the right moment for the Church is the Jubilee Year of Mercy.

What was it like being involved in this cause?

It’s certainly changed my life. I would have been doing other things these past 17 years. It’s been an opportunity to find out more about Mother Teresa. I remember after the positio was completed [the written case examining how Mother Teresa lived her Christian life], and especially that first volume, which presents how she lived the Christian virtues and her reputation for holiness, I remember thinking to myself, “Actually, I know Mother Teresa better now than when I was with her when she was alive.” Because I have my own little experience and other people have theirs, but when you put it all together and just see, that’s impressive in itself.

You knew her well. How did your relationship affect you as a disciple of Christ?

Just doing this [canonization] process itself, I remember thinking if I tried to look at the whole thing in the beginning I would have thought, “How is this going to happen? How am I going to do this? It’s just so overwhelming. What a responsibility.”

But one of the things [I thought of was what] Mother called “the spirit of the society,” which is “loving trust, total surrender,” which is actually the “Little Way of Spiritual Childhood” [attributed to St. Therese of Lisieux], because St. Therese used “confidence and abandonment.” And Mother was always practical, so she added a third element to those two, which is cheerfulness—an external way of indicating how well you’re living the trust and surrender.

So regarding the process, if I had looked at the whole thing it would have been frightening and “How am I going to do this and what if I make a mistake and the whole Church is watching?” But then I said, “Just one step at a time, in trust and surrender, and God will take care of it, and Our Lady is there, and Mother herself is interceding, so let’s proceed.”

And that’s how we got to this point.

By the end of her life, Mother Teresa had become quite a celebrity. Do you think she wanted that? How did she feel about it?

That was one of the greatest sufferings, to be in the media, to speak, the photos…. You probably heard of the deal she made with Jesus: “For every photo, a soul out of purgatory.” So it was like a real cross, and because of that vow that she made in 1942 not to refuse Him anything, to give Him whatever He asked for, difficult as it was, she accepted it as part of the life, for the sake of having the poor better known.

So the awards she received were accepted in the name of the poor, so it would bring greater attention to the poor, a chance to be able to speak about God. So those were why she would be willing to go through all that stuff. And she knew that if she had to do an interview or someone was writing a book about the work, it would help the mission. So ultimately it was for the sake of the poor and the benefit of the poor.
What does her life have to say to us living in 2016 America, which seems to be going through so much turmoil now?

On a spiritual level and not a practical one: policy-wise, she wouldn’t pronounce on it, but on a principles level or a Christian values level, she would say “My brother, my sister,” no matter what religion they are. In the film Mother Teresa by the Petrie sisters, there’s a scene during the conflict in Beirut, Lebanon, where she hears about these Muslim children who are really suffering, starving, so she wanted to go there and rescue them. The people who were advising her said, “No, Mother, you can’t go there, there’s a conflict, there’s fighting, it’s just not safe.” And Mother said, “No we have to go there, we have to do something. I’m going to pray to our Lady for a ceasefire.”

And then the next scene is: there’s a cease fire—on Aug. 15 (Feast of the Assumption of Mary).

So she goes over and brings these Muslim children over and cares for them. There’s one child traumatized, literally shaking constantly, so there’s one sister just holding him, so he calms down. After that, Mother is talking to doctor, who is Jewish. So you have a Jewish doctor helping a Catholic nun take care of Muslim children.

Or when she opened a house in South Africa in the time of Apartheid. She deliberately chose one white sister, one black sister, a brown sister, which means from India, and a fourth.

She had this thing that anyone is my brother or sister, and on a human level everyone has dignity. And we’re all children of God. And there’s the faith aspect, that she saw each person—president, queen, king, prime minister, man on the street or in a soup kitchen, man dying in the home for the dying—everyone is Jesus.

So those are the principles, the faith vision she would go by, and it’s up to people to take those and make policy out of them.