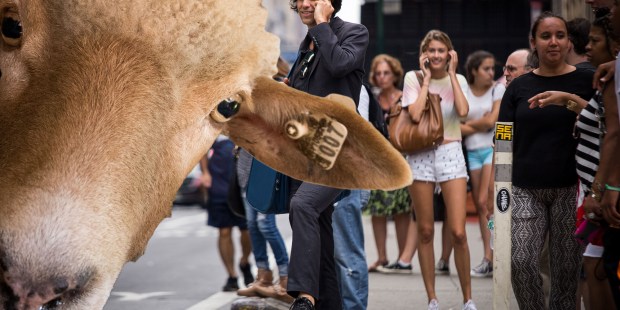 A tree grows in Brooklyn. You’ve heard that, right?

Well I’ve got a better one for you: sheep safely graze in Manhattan.

It’s not every day that the city health department gets a request from someone who wants to house sheep. But that’s what happened when Old St. Patrick’s Cathedral, which may have had some livestock back in the 19th century, when it was started, did the paperwork three years ago.

Although the church is a short walk from Little Italy, it was not in the pastor’s mind to see them end up in a rack of lamb dish.

There was some practicality in Msgr. Donald Sakano’s thinking, though, but in the end, the animals’ greatest service may be as a conversation piece in a place where few things turn people’s heads any more.

“It began with our groundskeeper retiring,” Msgr. Sakano said. “I remember saying to him, ‘Well what are we going to do—get sheep?’

He found them at the White Barn Farm in New Paltz, some 90 miles to the north, where former Brooklynite Paula Kucera has been raising Cormo sheep for almost 10 years. Kucera agreed to lend the parish a few of the animals for the summer of 2014. After securing the necessary permit, the parish welcomed “Gold, Frankincense and Myrrh,” who got to work right away, trimming the grass around the weather-beaten headstones of the parish’s historic cemetery.

That’s when Peter Golia, a contractor from Long Island, was working on a building renovation across the street. He walked into a coffee shop and was remarking about how beautiful the church looked. Msgr. Sakano happened to be standing nearby and engaged him in conversation.

“He told me about the sheep, and I offered to build a fence for him,” Golia said.

For the third summer in a row, “Old St. Pat’s” has welcomed sheep from Kucera’s farm. This year’s flock are named Faith, Hope and Charity.

“People are obsessed with the sheep, it’s so funny,” said Christine Mykityshyn, a young adult parishioner who lives in the area. “I pass them every day on my way to work, and there’s always crowds just staring at them in awe. I think it’s just the incongruity of seeing sheep in a cemetery of a thriving church in the middle of a really trendy neighborhood.”

And that has actually led some people into “the flock.” Msgr. Sakano relates the story of one young man who has an apartment overlooking the church grounds. Once that view became more, er, pastoral, he threw a sheep-themed party. He later went through the RCIA process and is now a member of the parish.

Golia, meanwhile, decided to take his wife and three younger children to Mass at Old St. Pat’s, and they have been so impressed with the spirituality there that they continue to make a weekly 40-minute drive into lower Manhattan each Sunday. The pastor, he said, “brings up stuff [in homilies] that you know in real life happens. The kids are really interested in it, and he gives them things to do like, ‘Who can tell me who the three archangels are?’ So the kids are really involved…. They really embrace the whole thing, and they feel at home.”

And, of course, they like going to see the sheep, who will be there until mid-September.

The former cathedral, replaced by the larger, more famous one uptown in 1879, has witnessed the growth of the Big Apple from the time of the first bishops of New York. It has welcomed waves of immigrants, notably the Irish of the 19th century and the Italians of the 20th. Its sanctuary was used to film a baptism scene in The Godfather that was violently juxtaposed with the rubbing out of the heads of competing crime families.

Nowadays the neighborhood is home to millennials who have good-paying jobs in law, finance, real estate, and other fields, and Msgr. Sakano compares them to the immigrants of decades past, many of whom were unchurched when they got off the boat.

“We need to support their spirituality and help build up their faith so they can live in a world that is filled with pitfalls and challenges alien to Christianity,” he said. “I’d like to think we can equip people with a vision to … make decisions about themselves that are in concert with the way God would have them live their life, therefore on a path to happiness, as opposed to what the world heaps upon them as immediate gratification and short-term pleasure, but ultimately does not satisfy.”

It’s a challenge that many churches are taking up, in an age when younger people are becoming less and less “churched.” Just across the East River, for example, Franciscan friars are walking the streets of a neighborhood that’s become known as a hipster mecca.

But the Sunday 7 p.m. Mass at Old St. Pat’s is regularly “packed” with young adults, says Mykityshyn who moved to New York four years ago and quickly found “a really good community.”

“You get the sense that everyone really wants to be there,” she said, citing priests who speak directly to the concerns of young professionals. In addition, a post-liturgy social in the parish house helps to build community.

“It’s really refreshing to see all the people who share the demands of New York City work culture but also looking for something a little more nourishing, and that something I find every Sunday,” said the 27-year-old publicist. “The parish does a good job of using the neighborhood to foster community, and in New York it can be very easy to get lost.”

Valerie Cahan, an attorney at a big corporate law firm in Manhattan, went through the RCIA program at Old St. Patrick’s because even though she had been confirmed as a teenager, she had been away from church for many years, except an occasional visit to Old St. Pat’s when she was an undergrad at New York university. When she returned to New York after law school in Chicago, she sought out Old St. Pat’s as a place to get involved.

“I become very close friends with others [in RCIA], and we wanted to continue meeting and discussing things we read—Scripture and other books,” she said. “Monsignor does that with us, and we’re very lucky he spends that time with us.”

It is, perhaps, the sort of outreach to young adults that Msgr. Sakano wants to continue in a planned Center for Spiritual Formation, in the parish’s old school building. “We need to encounter them in ways that they come to enjoy the celebration of the sacraments as stepping stones to a happy life, in a world that may look enticing but which has its traps.”