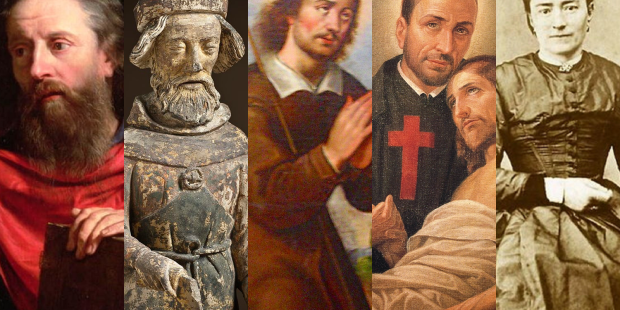 These holy men and women knew that work, when it is united to the will of God, bears abundant fruit

“Through work [men and women] must earn [their] daily bread and contribute to the continual advance of science and technology and, above all, to elevating unceasingly the cultural and moral level of the society.” (Saint John Paul II, Laborem Exercens)

Observed on the first Monday in September, Labor Day was established in 1894 to honor the “social and economic achievements” of American workers. According to the United States Department of Labor, “Some records show that Peter J. McGuire, general secretary of the Brotherhood of Carpenters and Joiners and a cofounder of the American Federation of Labor, was first in suggesting a day to honor those ‘who from rude nature have delved and carved all the grandeur we behold.’”

Work is an important aspect of human life and separates us from the rest of creation. From the very beginning Adam was called to “work,” as the book of Genesis narrates for us, “The Lord God took the man and put him in the garden of Eden to till it and keep it” (Genesis 2:15).

Many saints responded to this vocation of work by using their minds and hands to contribute towards the well being of society. When they offered their lives to God, they also gave him their gifts and talents for the greater good of all. They knew that work is necessary for the flourishing of civilization and when it is united to the will of God, it bears abundant fruit.

Here are five such saints who were known for their labor and who help us understand there is great value in work.

To help with travel expenses Paul did not charge fees for his preaching, but instead took up the trade of tent making. He expressed in his letter to the Corinthians how, “we labor, working with our own hands” (1 Corinthians 4:12). In the book of Acts we see how after visiting a man named Aquila, Paul joined him and his wife in their work.

“And he went to see them; and because he was of the same trade he stayed with them, and they worked, for by trade they were tentmakers” (Acts 18:3).

Tents were an important part of life in ancient Israel and in the Roman Empire. For example, tents were needed for semi-nomadic shepherds as well as for the athletes who participated in the Olympic games. Odds are likely Saint Paul made tents for both groups.

Martyrs of the Early Church who were beheaded during the reign of Diocletian, Crispin and his brother Crispinian sought to imitate Saint Paul and worked for a living while preaching the Gospel to those in Gaul.

They spread the Christian faith during the day and at night made shoes, taking special care to also make shoes for the poor. Their work was profitable enough and gave them sufficient money to continue their ministry. They were both killed during the persecution of Diocletian for their evangelization efforts.

Saint Crispin’s feast day is celebrated on October 25, and is also known as the “Shoemaker’s Holiday” as shoemakers typically closed on that day. The day is also well known for the Battle of Agincourt fought on October 25 and the “St. Crispin’s Day Speech” found in Shakespeare’s play, Henry V.

Isidore was a hired hand for a wealthy farmer outside of the city. Others knew him for his compassion to the poor and how he often shared his meals with them. Isidore eventually married (his wife, Maria, is also honored as a saint) and had one son.

Isidore would typically attend Mass before going out to the fields and his fellow workers complained to the owner that he was always late. According to one legend, “his employer saw him take the plough into a field, and was about to confront him when, in the pale, misty light of dawn, he saw, as he thought, a second plough drawn by white oxen moving up and down the furrows. Greatly astonished, he ran towards it, but even as he ran it disappeared and he saw only Isidore and his single-plow. When he spoke to Isidore and enquired about the second plough he had seen, Isidore replied in surprise: ‘Sir, I work alone and know of none save God to whom I look for strength.’ Thus the story grew that so great was his sanctity that the angels helped him even in his plowing.”

After many years of military service, Camillus became a caregiver at a hospital in Rome and took as his spiritual director Saint Philip Neri. De Lellis was not satisfied with the care each patient received and was moved by the Holy Spirit to found a new religious group that would strive to meet the needs of all the sick.

In particular, de Lellis established a group of health care workers who tended to the needs of soldiers on the battlefield. They distinguished themselves with a large red cross on their cassock and since then the “red cross” has become a universal symbol for charitable works and first aid.

A few hundred years later, the International Committee of the Red Cross adopted the same symbol to use on their uniforms for health care workers providing first aid to soldiers and volunteers wounded on the front lines.

After being denied entrance to the convent, Zelie devoted herself to making lace and was well known in the area for her point d’Alençon. She continued this trade after getting married to Louis Martin and eventually hired additional help to meet the demands of customers.

Her lacemaking business was so successful that Louis closed down his watchmaking store in order to devote his time to support his wife’s endeavors. For several years it was her business that supported the family financially. She was able to balance this home business while raising a household of children who would go on to pursue the religious life (including St. Therese of Lisieux and her sister Leonie, whose cause for sainthood was initiated in 2015).