My challenge to my teenaged son (and his to me) 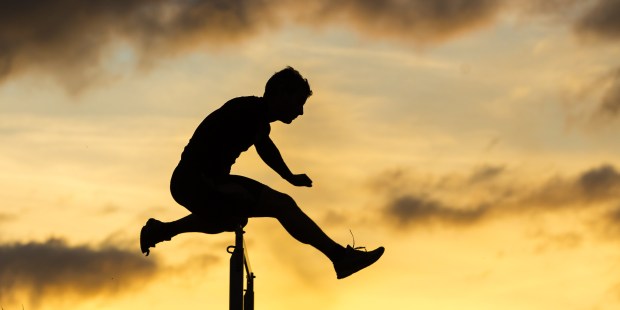 It began as a question to my teenage son. I pick him up every day from cross-country practice and he always finds me with my favorite vice in hand. He’s been after me about cutting back on my unhealthy, constant consumption of Diet Coke, and about exercising more and being more mindful of my cooking and eating habits.

I’d in fact just considered a stop at a drive thru before picking him up, but opted not to, in light of what I knew would elicit his chiding.

His criticism is fair. I do need to watch my health. But I figured turnabout was fair, too.

“What are you doing to grow in faith?”

“What?” He looked out the car window, clearly wanting this conversation as much as I want to dial back drinking my favorite soda. I repeated the question.

“What do you mean?” he squirmed. “I go to Mass on Sunday. I say grace at meals.”

“That’s like me saying I work out once a week. Is that enough to get fit?”

He put his head down and came up with what he thought was a winning response, “It’s better than those who don’t go at all.”

“But you’re more fit than those who don’t ever exercise.”

“No.” He looked out the window again.

This son is a long distance runner. He runs almost every day. He runs for hours. He eats what will best help his body both recover and start again. He wears special socks and special shoes. He varies his runs to tackle hills, trails, different distances, and he goes in every weather. He does not quit and he does not miss.

He is the healthiest person in our family, physically speaking. He is an expert who goes on working at his love as if he were an amateur.

“Is once a week enough to have a faith life?” I knew my pressing meant I was in for a serious nag about getting to the gym.

“I went to Catholic school.”

“No. We sent you to Catholic school. Now, you’re in high school. Now you’re confirmed. Now, it’s your job to grow your faith. Saying you went to Catholic school is like me saying I kick-boxed for three years. It counted then. It may still be helping me now, but it’s not helping me grow healthy, it’s just keeping me from backsliding as fast as I otherwise would.”

He took a big swig of his water and gave me one of those “do you have to be right Mom” looks.

Endless options immediately came to my mind: Devotions, lives of the saints, volunteer work, reading Scripture, praying the rosary, adoration — I have dozens of prayer cards and email novenas and the Magnificat, all at my fingertips.

However, just as his telling me there are workout DVDs, diet plans, dietitians, gym memberships, exercise videos, magazines and personal trainers would not lead me to necessarily get started, I knew I couldn’t rain down all the options that were instantly in my head, as it would overwhelm him.

“If I were to want to get into serious running shape, how should I start?”

“You should stretch and then try to jog/run for a few minutes, then walk, then run again, then walk, and maybe start with one, two, or three miles, but keep going back to the running once you’ve caught your breath.”

He pointed at me … this was a non-verbal contract. I was to do this.

“So start small?” I verified.

“You should maybe spend just a few minutes praying, not saying memorized prayers, but speaking to God, giving thanks for all that is good in your life, and asking for the grace to do what you should.”

We both sat thinking about what we’d challenged the other to do, both wrestling with our own wills, which are resisting what we know is for our own good.

We sat in silence, recognizing our own unwillingness to address our failings. I sighed. “So if you can’t yet do what I suggested, ask for the will to do it.”

He gave me his trademark teen grin that gets me to cook extra pasta at meals and buy him chocolate milk shakes after runs.