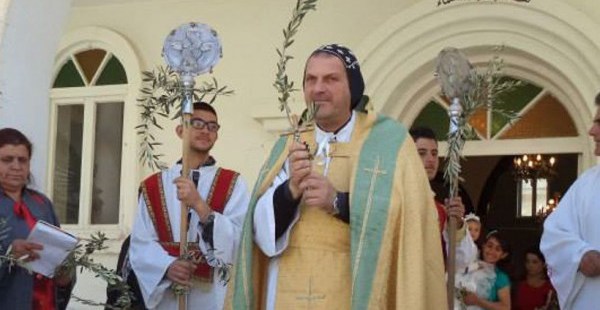 Once kidnapped by jihadists in Syria, he ministers to those who fled Islamic State in Iraq

Christians who are displaced in northern Iraq because of the advance of the Islamic State group have a priest ministering to them who knows what they are going through.

Because he was there himself.

Father Jacques Mourad ministers in Sulaymaniya, in Iraqi Kurdistan. He serves the many displaced Christians from Qaraqosh, in the Nineveh Plain, who have fled in the face of the advance of the jihadists.

It was these same jihadists who kidnapped him from the Syrian monastery of Mar Elian in May 2015, along with hundreds of other Christians. They all signed a “protection contract” with ISIS, that allowed them to continue living as Christians but imposed a heavy tax and other severe restrictions. Finally, after several months and after taking control of Father Mourad’s home town of Quaryatayn, they released the Syro-Catholic monk.

Father Mourad is a member of the monastic community founded by Father Paolo Dall’Oglio, who has been missing for several years.

After a few months spent recovering in Rome, Father Mourad decided to return to the Middle East. In spite of all the troubles of the past few years, he still finds different peoples living together in harmony, threatened only by “religious and political factors.” The priest teaches children the catechism and prepares them for first Communion. He spoke with Vatican Insider about his experiences and prospects for the future.

How did you celebrate Mass under the jihadist regime?

In Quaryatayn, we managed to celebrate the first Mass on September 5, exactly a year ago. The Islamic State’s jihadists brought us — more than 250 Christians — back to our city, having held us hostage in various locations. We found an underground space in a building situated in what was once the Christian neighborhood. As we —Syro-Catholic and Syro-Orthodox faithful — celebrated Mass together, we were full of awe at the miracle we were experiencing.

Yes, me especially. It was the first Mass I celebrated after four months and 15 Sundays spent in prison. At the beginning there was fear: what if they, the jihadists, turned up? How would they react? Then I felt a sense of gratitude wash over me, an urge to give thanks to Him who supported me through all those trials, even as they told me they would slit my throat if I did not convert.

I thought a great deal about that Mass, after I heard the news about the martyrdom of Father Jacques Hamel who was slain at the altar of his parish church in France.

During your imprisonment, when you were unable to celebrate Mass with the others, what did you do?

At dawn I would always sing the entire Mass, remembering my parish choir and the Masses celebrated at the monastery of Mar Musa. … I was also held prisoner in Raqqa for a while—this was the city where Paolo Dall’Oglio went missing… While I was there, I imagined him in a situation similar to my own in that same city, possibly just a short distance from me and I felt him close to me, as he was at the start of our common monastic journey in Mar Musa, the monastery in the desert. That bathroom where they kept me locked up had a sturdy iron door which reminded me of my cell door at the monastery. I shared a paradoxical bond of friendship with that prison. It wasn’t a comfortable environment, especially given my fragile health. But I didn’t feel anguish. I sensed the grace experienced by St. Paul when he heard the Lord saying to him: ‘My grace is enough for you.’ Even in my innermost weakness, it was Him who revealed His strength.

What is the prevailing spiritual state of Christians caught up in the Syrian conflict?

They are wondering how all this could have happened. But then they give thanks to God and place themselves in His hands. I haven’t seen people rebel against God.

Military interventions against the Islamic State have intensified in recent months. What is your take on these in light of your experience?

I remember when the caliph al-Baghdadi’s envoys came from Mosul to Qariyatayn to inform us about what was going to happen to us according to the Islamic State decree. It was August 31. I remember them saying: “We want to spread fear in the world because the ‘crusaders’ are bombing the land of Islam. It is they who are carrying out attacks, killing women and children and destroying houses. We are simply defending our territories and Islam against the aggressors…” Today I must reiterate that bombardments only intensify and reinforce this sentiment among many, and not all of them are jihadists.

How are Christians to view what is going on there?

They can look at the situation bearing in mind what Jesus did for our salvation, sharing in our suffering. This is the only way a Christian can look at the tragedy of a dying country where everyone is devastated. Like the millions of refugees who lost everything and are living in desperation. The words of Christians who are suffering as a result of the war can echo Christ’s: “Father, forgive them, for they know not what they do.”

They are also paralyzed by the fear factor. And their silence is passed off as a sign of complicity with those who are spreading death and terror. It takes courage to get through difficult moments such as this and to dispel this misconception.

Pope Francis said that what we are witnessing is not a religious war.

It is increasingly evident that wars are perpetuated for economic reasons: an extreme and insatiable urge to accumulate, which is in itself a sign of death and destruction. What else do we want beyond wealth, power and modern development, what else do we seek? The scale of the prophetic appeal Pope Francis makes, proclaiming a Holy Year of Mercy in the very midst of all this, is just as vertiginous. We need the peace that comes from God.

Contempt and rejection of migrants is growing across Europe.

Everyone accuses migrants, dumping the blame on them as Adam did with Eve in earthly Paradise. We are grateful for what volunteers of European and international organizations are doing to help populations affected by wars. Their actions move us. We see the spirit of fraternity shown by many in welcoming immigrants. The inconsiderate reaction of one person certainly does not reflect everyone. And we are very much in need of help and support from the outside. At the same time, the process of finding out who is responsible for all that is going on and for the suffering inflicted on entire populations that are forced to flee their homes leads to the political choices made in Europe and North America.

But is there nothing that can be salvaged from the interventions of the international community?

Right now there is no population that can free itself from these wars by itself. This is evident in Syria, Iraq and Yemen. It is evident everywhere. There are other powers and forces that are stoking proxy wars a long way away from their own borders. Today, real analysts don’t miss a thing. Many see what governments and international institutions are secretly getting up to. And ever since economic and military powers got mixed up in wars in the name of the defense of peoples and democracy, the reasons and opportunities for new conflicts multiplied. Painstaking efforts are made to avoid taking initiatives that would be a given if political and strategic choices were consistent with stated principles. For instance, to demonstrate its genuine love for the Syrian people, Russia could open its doors to the displaced and the refugees fleeing Syria. This would also quell tensions in Europe over the immigration emergency.