5 things my young kids are learning from their elderly grandma 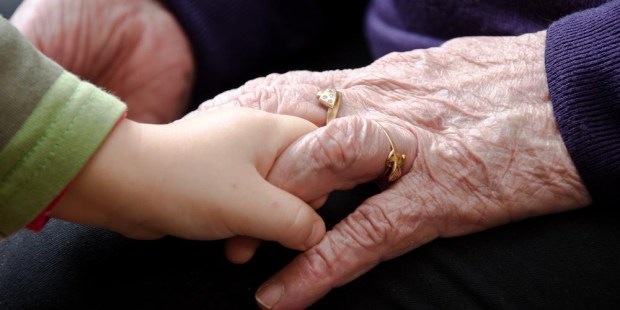 In many parts of the world the feast of  Joachim and Anne — the parents of the Blessed Virgin Mary — is celebrated as Grandparent’s Day. My kids look forward to the celebration, especially because their grandma (my mom) lives with us.

She has late-stage Parkinson’s and has lived with our family for almost seven years now, so not even my oldest child can remember a time before Grandma was part of our household.

We’re unique members of the sandwich generation because my mom was 42 when I was born (and I have two younger siblings!) and my husband and I married later in life, so while most of our peers have teenagers, we have infants. That plays out to mean we have diapers on both ends of the spectrum. Yes, it’s hard. But it’s also great. It’s especially great for our kids.

Here are 5 lessons I think my children are learning from having Grandma in the house.

Since she’s mostly unable to speak, my kids don’t expect stories about The Olden Days, or to be read to. They know if Grandma is left alone at the dining room table, she’ll get up to “mischief,” such as spooning her cereal into her coffee. They know if you leave your doughnut unattended and within her reach, you’ll come back and it will be gone; her sweet tooth is not feeling any of the weakening effects of age!

But what she does — or doesn’t do — makes no difference to them. Grandma is part of the family, plain and simple. There’s always a “g” for grandma in alphabet games, and their portraits of the family always include her.

Nothing about my mother’s daily needs is surprising or distressing to them and they will fiercely defend her if I have a moment of impatience. They know she wears diapers just like their little brother and a caregiver’s disabled son. And — and this is important — they think it entirely expected that they’ll go back to wearing diapers one day themselves.

They couldn’t yet express it this way, but they have the awareness that truly, we are all burdens to one another. They see that every relationship takes some bearing up. All relationships take sacrifice — all of them.

3. Heaven is just around the corner

Grandpa was gone long before I met my husband, but we often talk about him, and especially remember him on the Day of the Dead. They know Grandpa “lives in heaven.” And since Grandma is in our living room, and Grandpa is in heaven, a natural connection is formed between these two “places.” Heaven comes up a lot in daily conversation. That’s a good thing because we need to remember what Hebrews speaks of as the “anchor of the soul,” in that “interior behind the veil” (6:18-20. Check out this passage sometime. Pope Francis wowed me with this image of our anchor being in heaven. I didn’t realize till later that he was referencing Scripture).

More to read: Day of the Dead: Faith and Folklore Honoring the Life of Those Who Have Gone before Us

Many circumstances can teach kids important lessons about how the world does not revolve around them. Having to forego this or that activity because it is not suitable for a wheelchair or because there’s no one to stay home with Grandma does this trick nicely. And they’re better people for it.

My son and I were talking about it just this week.

“Nooooo,” he replied unbelievingly. “That’s in … in …” and started counting on his fingers. I waited as he did the math and realized that Grandma would be 102 by then.

“Yes, they do sometimes honey. But … not always. … We’ll miss her when she goes to Heaven, won’t we?”

And his face clouded, as if he rarely thinks of that day.

But then he added, “Yes. … But she’ll be happy because she’ll get to be with God.”

Saints Joachim and Anne, pray for us.

[Editor’s Note: Take the Poll – Should we live with our elderly parents?]