Swipe your smartphone, send a blessing 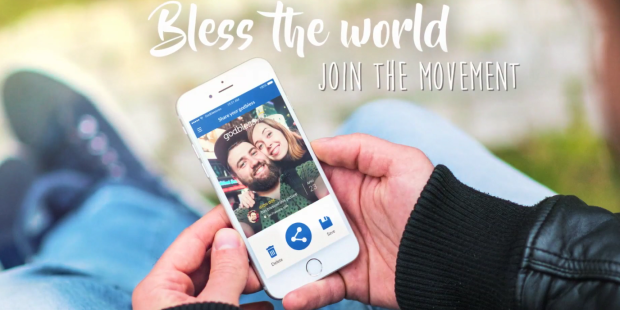 Sebastien Poncelet, 39, is in charge of communications for a large telecommunications company and wants to help young Christians live their faith in a modern and innovative way with a new project called Godblessyoo.

“With technology including social networks, we are all ‘super-connected,’ but what do we do if cannot share our faith?… Smartphones today offer us new opportunities and being able to make a cross on the touch screen to bless friends was so obvious,” says Poncelet.

Arriving at the decision to create this app came out of a diverse range of experiences. “I like to think that I had several lives — a singer in a rock band, cultural mediator, and composer/sound designer for TV and the video game industry,” says Poncelet. “I feel guided in everything I undertake; Godblessyoo is a logical extension of an unusual career and unlikely encounters.”

The Godblessyoo team is currently made up of seven people: developers, experts in marketing and entrepreneurship, and a priest —  Fr. Geoffroy de la Tousche, a parish priest in Dieppe, France.

“Fr. Geoffroy brings his vision as a man of the Church and his expertise as a seasoned user of social networks,” explains Poncelet. “Godblessyoo is an unconventional project, so his help is invaluable and also meets our spiritual issues as well as our questions related to the application’s functionality.”

Since the idea was born, Godblessyoo has been well-received at regional events and in the local press, as well as by people who’ve heard about it and sent in letters of support. The team is working with Bear-Studio and Poncelet says the greatest challenge will be making it successful in France, given the country’s complex relationship with religion.

Finding funding for the project hasn’t been easy, but they’ve been able to raise over $13,000 so far to help them complete the development of the app and a beta version has been launched. People are invited to share their opinions about it. “This phase is crucial for us because it will allow us to gather the opinions of our first users and significantly improve application,” says Poncelet.

As for the cost to users, Godblessyoo will be free.

“We have some interesting ideas for the business model that we will test in the future, but blessing your friends is and will remain completely free. Our goal is to build a solid foundation… Those who wish can also support us by making a donation via our website,” says Poncelet, who believes that the important thing about Godblessyoo is not so much the ability to bless friends, but to share these blessings on social networks. “Also, we believe that artists (and the public) will use Godblessyoo at concerts or cultural events. Of course we hope to see celebrities and opinion leaders among our ‘godblessRs,‘” he says.

Down the road, Poncelet would like to see Godblessyoo become a social network in its own right. “But the road is still long and we need you!”