A hidden Catholic gem: Blessed Sara Salkahazi, rescuer of Jews from the Nazis 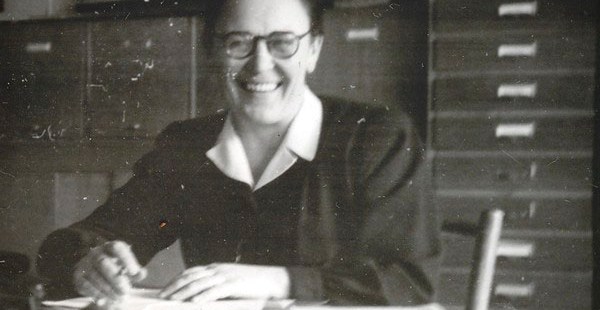 Like Dorothy Day, an obedient daughter of the Church called to social work

Embedded among the thousands of shining stars who have been elevated to the rank of canonized saint in the Catholic Church are those I call “hidden gems.” Looking for them is like stopping at a yard sale. You never know what you may find.

Recently, I made a great discovery: Blessed Sara Salkahazi.

Sara was born in Hungary in 1899 and, from a young age, was a fiercely independent and strong-willed girl. Her brother described her as a “tomboy” who wanted to do things her way. The first thing she did as a young woman was to become a teacher.  She also began to write articles about the poor.

She was indignant about the way women were treated in society and wanted to better understand how to oppose this discrimination. So she left teaching and took a job as a bookbinder’s apprentice, being relegated to the dirtiest and hardest work. She thought that if she did a “man’s job” she might understand them better (I have no answer as to what she might have discovered). She also continued writing about the disenfranchised.

Sara then went to work in a millinery shop selling and making women’s hats. From there her life slowly morphed into one of a journalist and soon she became an editor for the newspaper put out by the Christian Socialist Party, which focused mostly on women’s issues. At this point in Sara’s life she was not religious at all. In fact, she was mostly agnostic, tending toward atheism.

But then Sara came into contact with the Sisters of Social Service. She felt a strong calling to be part of their group and asked how she could join. The Sisters of Social Service was a fairly new order dedicated to charitable, social and women’s issues. Sara, a fast talking, chain-smoking bastion of unbridled energy, was rejected as a possible candidate. She would not be deterred.

Sara kept trying to join the Sisters. She even quit her smoking habit, which was more of a challenge for her than she ever imagined. Her perseverance paid off and in 1929, at the age of 30, Sara was admitted to the Sisters of Social Service. Her motto was from the Prophet Isaiah: “Here I am! Send me!” (Is 6:8b). Sara Salkahazi’s agnosticism had completely disappeared.

Sister Sara, a bundle of energy, began organizing work for Catholic Charities, editing and publishing a women’s journal, managing a religious bookstore, teaching and supervising a shelter for the poor. Sara was then asked by the Bishops of Slovakia to organize the National Girls’ Movement. Her life was now busier than she could have ever imagined. More responsibilities were on their way. Some of the sisters in the order thought she was “showing off.”

In one year Sara received 15 different assignments, from teaching at the Social Training Centre to cooking for the needy. She became exhausted, not only physically but spiritually. Sara’s greatest challenge was dealing with the fact that the order deemed her “unworthy” to renew her temporary vows. Sara was heartbroken. She prayed and prayed and decided to “stay the course” for the One who had called her. About a year later, her prayers were answered and she renewed her vows.

Nazi ideology was sweeping Hungary and the Hungarian Nazi Party was gaining strength. They began to persecute the Jews. The Sisters of Social Service began to provide safe havens for Jewish people. Sister Sara opened the Working Girls’ Home to help those being displaced. In March of 1944, German troops began their occupation of Hungary.

Sister Sara, realizing the extreme danger now confronting all Hungarians, offered herself as a victim-soul for her fellow Sisters of Social Service. Permission was needed to do this and she asked her superiors for it. It was granted and, at the time, they alone knew about her self-offering.

In 1943, Sister Sara began smuggling Jewish refugees out of Slovakia. During the final months of World War II, she helped shelter hundreds of Jewish people in buildings belonging to the Sisters of Social Service. As director of the Hungarian Catholic Working Women’s Movement, she smuggled over one hundred to safety all by herself. Unfortunately, time was not on her side.

On the morning of December 27, 1944, Sister Sara and another sister were returning from a visit to another Girls’ Home. Little did they know that a woman who worked in the house had betrayed them. They could see the Nazis standing in front of their house. They could have sneaked away but Sister Sara, as the director, would not do so. They went into the house and were immediately arrested.

That night, Sister Sara and her friend, four Jewish women and one Christian worker,  were loaded onto vehicles and driven to the edge of the Danube. They were stripped and shot to death, their naked bodies being tossed into the freezing river. Miraculously, Sister Sara’s sacrifice must have been accepted by the Lord. None of the other Sisters of her community were ever harmed.

Sister Sara Salkahazi was declared “Righteous Among the Nations” by Yad Vashem in 1969. On September 17, 2006, Peter Cardinal Erdo, the Archbishop of Budapest, read a proclamation from Pope Benedict XVI beatifying Sister Sara.

The proclamation said, “She was willing to assume risks for the persecuted…in days of great fear. Her martyrdom is still topical… and presents the foundations for our humanity.”