Mother Teresa responds to her critics 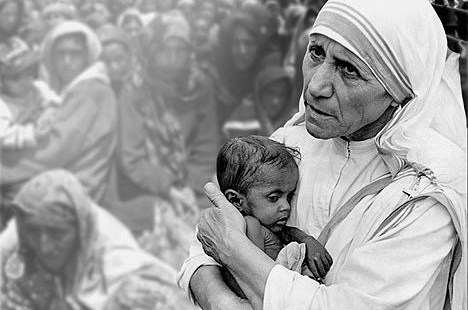 I realized that while I was ferociously defending her good name, Mother Teresa was completely uninterested in her reputation

But I say to you, love your enemies, and pray for those who persecute you, that you may be children of your heavenly Father, for he makes his sun rise on the bad and the good, and causes rain to fall on the just and the unjust. – Matthew 5:44-45

I have to admit. During the buzz about Mother Teresa’s canonization I lost my cool several times online upon seeing the unadulterated vitriol directed at the little saint from her many “critics.” (If you don’t know what I am talking about, check out the vicious comments on this Facebook post from NPR.)

I could have handled objective, measured, logical criticism of Mother Teresa’s work. Certainly, she did not do everything perfectly or always make the right decisions. What human being does?

But the bulk of the nasty attacks against Mother Teresa are weak, straw man arguments based on awe-inspiring leaps of logic, very little factual data, and assumptions about her intentions. Not to mention they often display an ignorance of Catholicism that is astounding, and almost always rehash (sometimes completely unknowingly) tired, unfounded arguments from the source of this vitriolic criticism, the now deceased father of New Atheism, Christopher Hitchens (a man so ethical he stole footage for his documentary about Mother Teresa from unsuspecting nuns).

A while back, I wrote an article responding to some of Christopher Hitchens’ arguments against Mother Teresa. This past week I considered writing a follow-up but I soon realized that it would be in vain; at a certain point it makes no sense to argue against propaganda that has metastasized to this point. The majority of people who believe Mother Teresa was a monster are not going to be convinced by rational arguments. It would be like running into a horde of zombies and trying to get them to read Shakespeare.

So instead, I did what I usually do when I am feeling agitated and upset; I went to chapel and talked about it with Jesus. As I prayed, I thought about Mother Teresa in heaven. I imagined her rejoicing with the saints and interceding for the world, especially the poor and forgotten. I realized that while I was ferociously defending her good name, Mother Teresa was completely uninterested in her reputation. Neither is she, nor was she ever, concerned about how the world views her. Mother Teresa is indifferent to adulation or hate; she takes neither personally.

Mother Teresa displayed the same detachment when she was alive. When asked about the vulgarly-titled book that Christopher Hitchens wrote about her, Mother Teresa was quizzical at first, and then responded, “Oh, the book. It matters not. He is forgiven.”

There is so much in those simple words.

I don’t know about you but if someone wrote a vicious book about me that was full of lies, I would not have forgotten about that book, or the author. In fact, I can think of a few people right now whom I have only halfheartedly tried to forgive because they treated me unfairly, gossiped about me, or saw me in a negative light. None of these people ever wrote a book about me and commandeered mountains of hateful people to attack me. Yet, I still hold on to traces of resentment. But Mother Teresa saw things in the light of God. It was a book. Nothing more. Forgiveness was easy for Mother Teresa because she viewed everything in her life in proportion to its importance before God. Her work for the poor was paramount. When one is focused on service to the Creator of the World, a book, no matter how vicious, is just that, a book.

The next time I am struggling to forgive I will try to say: “It is just ________. I can let this go. Mother Teresa, intercede for me, and God give me the grace to let this go and to forgive this person.”

How long did it take Mother Teresa to forgive Hitchens? She must have forgiven him quickly to have so soon lost track of the issue entirely.

How does one forgive so quickly? Only by relentless prayer. By giving resentment over to God, quickly and repeatedly.

As I meditate on Mother Teresa’s response to her critics, I don’t regret my attempts to defend her good name, and I encourage anyone with the stamina to do the same. But I do regret losing my peace in the process. It was a sign that I was attached to Mother Teresa’s reputation far more than she ever was. It was a sign that I need to meditate on the Beatitudes, especially this one:

Blessed are you when they insult you and persecute you and utter every kind of evil against you [falsely] because of me. Rejoice and be glad, for your reward will be great in heaven. – Matthew 5:11

Perhaps we all would do well to meditate on that Beatitude in a culture that is increasingly inhospitable to the Catholic world view.

Like Mother Teresa, let’s not allow it to steal our charity or our peace.

Mother Teresa, pray for us.