First Mongolian priest in a thousand years meets with Aleteia 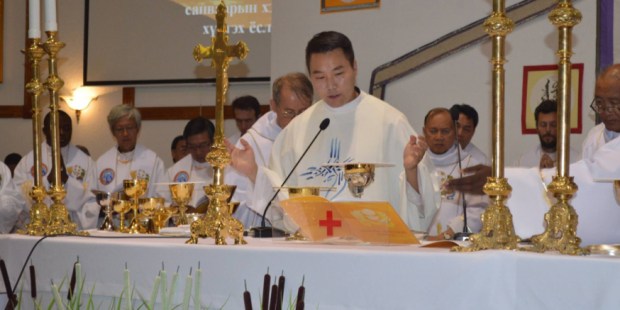 We interview Father Joseph Enkhee-Baatar, the first indigenous priest from Mongolia in a millennium

Aleteia: You were ordained a priest in Mongolia on August 28, 2016, which makes you the first indigenous priest for almost 1000 years! How do you feel about the historical significance of this?
Joseph Enkhee-Baatar: I am just glad and honored to have been chosen to be ordained here in Mongolia, and to be a small part of the mission. The first missionaries who came to the Mongol Empire were Nestorians. They came as early as the 7th and 8th century. Consequently, several Mongol tribes converted to Christianity. Then, in the thirteenth century under the Yuan dynasty, the first Catholic missionaries arrived. According to some historical documents, the Empire had about 30,000 Mongolian Catholics at that time. The Church then persisted for nearly 100 years under the reign of the Yuan dynasty. There were probably some priests ordained then although I have not found any reliable historical records. After the fall of the Yuan dynasty and the emergence of the Chinese Ming dynasty, Catholicism disappeared from the country.

In your opinion, why did so much time elapse between the first proclamation of the Gospel in your country and this first ordination?
Several reasons explain the gap between the first proclamation of the Gospel and the current revival of the Church. First, there is the emergence of the Muslims in the Middle East that prevented missionaries from coming to Mongolia, a landlocked country. Moreover, in the early 16th and 17th centuries, Mongolia adopted Tibetan Buddhism which eventually became the state religion. Mongolia was a theocratic country until the communist revolution. When she became Communist in 1924, Vatican plans for the evangelization of the country were seized. Only after the fall of communism in 1990, the first missionaries, three in number, came to Mongolia in 1992. Next year we will celebrate 25 years of the presence of the Catholic Church here.

It took time to evangelize Mongolia because our country has deep shamanic roots (the Tengrism) and other, more recent, roots in Buddhism. That is why people continue to perceive Christianity as a foreign religion and sometimes as a threat to Mongolian tradition and culture.

Mongolia has few Catholics. Will the fact that you are Mongol facilitate the evangelization of your compatriots?
Jesus said, “The harvest is abundant but the laborers are few” (Luke 10:2). So we need more priests, sisters and lay missionaries to work in the service of God’s kingdom. If you serve God and his people wholeheartedly with your words, your actions and your life, your nationality does not matter. You will always be a great help and instrument of evangelization for your country and the world.

However, we need more priests from our country because they will know better how to implement the teaching of Christ and the Church here. Thus, the Mongols will understand it better and accept it, not only as teaching from a foreign religion but as something that is close to their tradition, their culture and their lifestyle.

What is the size of your parish, the number of faithful, the percentage of Catholics in Mongolia?
In the whole country, there are about 1200 Catholics making up only 0.04% of the entire population. However, the total percentage of Christians in the country is around 2%. We have six parishes and several “sub-parishes” [out of the 21 provinces of Mongolia, 17 of them have no Catholic presence, Ed.].

What are the pastoral challenges that await you in these first months?
I was only ordained a week ago and have been staying in the house of the Mission of the Catholic Church. For now, I am awaiting the official letter that will tell me where I should go for my first pastoral assignment.