The Jesuit who invented hypertext 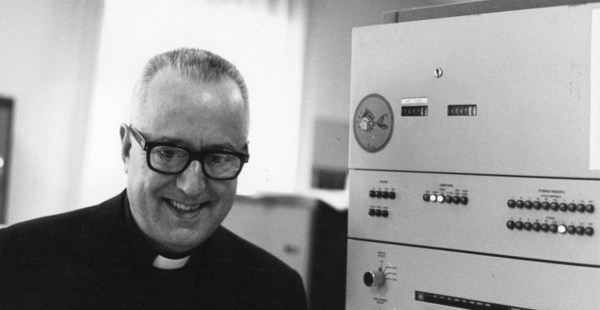 If you surf the internet, it’s thanks to him

Father Roberto Busa was born on November 28, 1913, in Vicenza, Italy, and died in August 2011. He entered the seminary in 1928, the Society of Jesus (that is, the Jesuits) in 1933, and was ordained a priest on May 30, 1940. He studied philosophy at the Pontifical Gregorian University in Rome, and his thesis on “the Thomistic terminology of interiority” it was published in 1949.

His thesis, however, was not his most important work on Aquinas: Father Busa is also the author of the “Index Thomisticus: Sancti Thomae Aquinatis operum omnium indices et concordatie,” a work in 56 volumes of almost a thousand pages each.

That’s quite a resume on its own, but Father Busa, in a classic Jesuit fashion, went magis. That is, excelsior.

Father Busa (who, of course, was a professor of Thomist philosophy, and mastered Latin, Greek, German, French, English and Spanish in addition to his native Italian) is the father of hypertext.

Once Busa finished his Index Thomisticus (a job that took him about 50 years, covering nine million words, as explained in this article published by the Venezuelan Jesuit SIC Magazine), he met with the founder of IBM, Thomas Watson, in order to produce a digital version of the Index in which a researcher could effectively search for related concepts in Aquinas’ work. Watson told Busa that the computers they had back then could not relate the contents included in the Index in any way. But Busa, of course, insisted.

This conversation gave birth to the hypertext project: a structure for sharing and linking information between different sources, through links.

Next time you click on a link like this — or need to search the digital edition of the Index Thomisticus — give thanks for this Jesuit!