What if The Beatles starred in Tolkien’s Lord of the Rings? 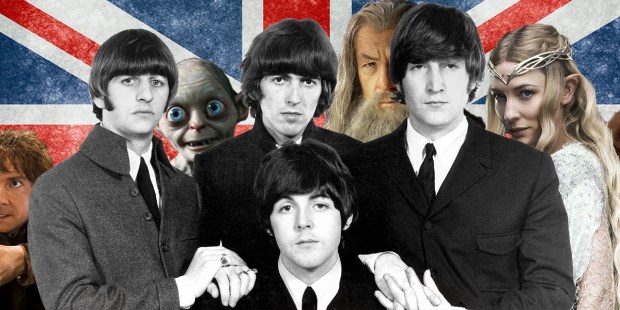 Imagine there’s a Fab Four in the Shire…

Next month one Brooklyn theater will explore that question in a Monty Python-esque comedy entitled The Beatles Present ‘The Lord of the Rings: The Musical.” The writer and director of the show wanted to explore, in a comedic way, what might have happened had Tolkien given a green light to the original project proposed by The Beatles.

Well before Peter Jackson took on the weighty task of bringing J.R.R. Tolkien’s realm of Middle-Earth to moviegoers, The Fab Four had approached the Catholic author in hopes of filling the roles of Frodo, Gandalf and company.

During the 60s and 70s the highly successful fantasy novel was all over pop culture. In particular, the “hippie” movement adopted the nature-loving characters of Middle-Earth for their own purposes and created such slogans as “Frodo Lives” or “Gandalf for President,” bringing Tolkien’s novels into the mainstream.

At the same time, The Beatles were at the height of their careers and had just finished acting in their second major motion picture (Help!) when they approached Stanley Kubrick (2001: A Space Odyssey, A Clockwork Orange) to be their director. The initial plan was for Paul McCartney to star as Frodo Baggins, Ringo Starr as Sam Gamgee, George Harrison as Gandalf, and John Lennon as Gollum. British model and actress Twiggy was to appear as Galadriel.

Kubrick considered taking on the project, but eventually turned it down because of the many difficulties of producing such a film. The main antagonist to the idea, however, was Tolkien himself. He did not like the idea of The Beatles staring as his characters and ultimately killed the project.

Besides being very picky about how his mythical realm was portrayed, Tolkien had a personal dislike of The Beatles and their genre of music. According to a letter written in 1964, Tolkien complained about a nearby garage band who was trying to be the next “Beatles” and their, “radio, tele, dogs, scooters, buzzbikes, and cars [making noise] from early morn to about 2 a.m.”

Tolkien added, “in a house three doors away dwells a member of a group of young men who are evidently aiming to turn themselves into a Beatle Group. On days when it falls to his turn to have a practice session the noise is indescribable.”

This impression left by the garage band did not help The Beatles’ cause, and perhaps played a part in why Tolkien put a stop the project.

However, while The Beatles were denied bringing Middle-Earth to the screen, the group, along with many other pop-icons of the 60s and 70s, made reference to it in their productions. One of their songs, “She Said, She Said,” includes a passing reference to The Lord of the Rings and John Lennon can be heard saying the words, “Ash Nazg,” the first words that are inscribed on the Ring of Power. Led Zeppelin infused Middle-Earth into a few of their songs at the time, such as “Ramble On” (1969), “Misty Mountain Hop” (1971), and “The Battle of Evermore.”

What would have happened if The Beatles were allowed to star in a film adaptation of The Lord of the Rings? During this month when we commemorate the 50th anniversary of Star Trek, Leonard Nimoy gives us a hint of what it would have looked like in a music video that was produced in 1967. (Oddly enough, another petition was floating around at the time with Nimoy playing Aragorn in a live-action film).