Cristo Rey Schools: “Ticket out of poverty” expands to Oklahoma 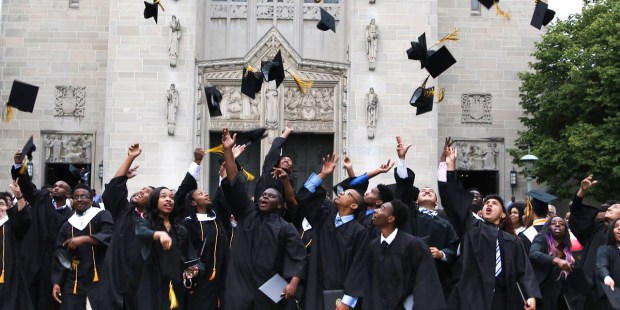 Many Americans became familiar with the scenes of devastation from this summer’s severe flooding in Louisiana. Among those affected by the high waters was Cristo Rey Baton Rouge Franciscan High School, which found itself under four feet of water just days after opening its doors for the first time. The school had just spent a year renovating a former Catholic high school and was beginning to educate 82 students.

The school is back, however, thanks to the helping hands of a lot of friends. Their school is being renovated while students attend classes in temporary quarters.

In some ways, the plight of this Baton Rouge school can serve as a metaphor for the lives of students served by Cristo Rey schools across the country. The network is an association of schools that use a unique work-study program to provide college preparatory education to students with limited financial resources.

Since the Jesuits opened the first Cristo Rey school on the southwest side of Chicago in 1996, the network has grown to 32 institutions. The newest addition is the Cristo Rey school in Oklahoma City, set to open in the fall of 2017.

“It’s a ticket out of poverty,” says Egli Colon, who taught at Cristo Rey New York High School from 2005-2013. “For many of them, going to college is a dream, but this [experience at Cristo Rey] makes it real, it makes it accessible. The school is committed to staying with the students, they follow up until graduation.”

The September 2012 edition of the journal Catholic Education described the unique work-study model developed by Cristo Rey and said that when it was applied in the high-dropout area of Chicago, students’ attendance at school vastly improved. It noted that 100% of Cristo Rey Boston High School’s graduating seniors have been accepted to four-year colleges and universities since 2010, with more than 90% of graduates directly enrolling in these institutions after high school.

One of them is Father Matthew J. Conley, who remembers “very dedicated teachers and staff who worked many more hours than what their paychecks reflected” at the Cristo Rey school he attended in North Cambridge. The school has since moved to inner-city Boston and has been renamed Cristo Rey Boston High School. “It was an opportunity for me as a white male to be in an environment where, as a minority in the school, it helped me get to know other cultures and the way other people lived,” said Father Conley, who was ordained a priest for the Archdiocese of Boston in May. He entered minor seminary right after he graduated from the school in 2008.

Megan Sweas, author of a book about the Cristo Rey network, Putting Education to Work: How Cristo Rey High Schools Are Transforming Urban Education, said that she found a “culture of high expectations” at Cristo Rey. “The network people, the administrators I interviewed, the teachers, the students all had an attitude of ‘What can we do better? How can we make the work study program more effective?'” Sweas said.

“We’ve always taken it for granted that Catholics are great at educating, especially students from low income backgrounds. The Cristo Rey network doesn’t really take that for granted,” she said.

Sweas noted that Cristo Rey’s work study program was started 20 years ago as a funding mechanism, but then administrators realized it was actually helping students to see their potential “and understand what they could do with an education and learn some of those character skills or those qualities that help them be successful academically or in a work environment.”

Jesuit Father James Van Dyke, who was principal of the Cristo Rey Atlanta Jesuit High School for the first two years of its existence, said that the work program taught students “to be a little more self-reliant.”

“A lot of them would never venture into these places,” he said of the corporations who partnered with the school and agreed to take even students who, they were warned, were “a little rough.” Going into the corporate envirnonment “would have been intimidating for a 14-year-old,” Father Van Dyke said. “But by the end of it they knew the people at the front desk, they knew the people on their floor. You get to know people because you ride the elevator with them or you arrive at the same time. That really changes the kids’ perspective. They think ‘Wait a minute, I can do this.’”

In addition, he said, students quickly learned that “we cared about them. We had tough dress codes and rules. You had to be on time for class, no horsing around, an absolute ethic of respect, time for prayer and reflection. They came to understand that we wanted them to have a future.”

“One mother was angry that she kept getting phone calls when her daughter didn’t  show up,” Father Van Dyke said. “I told her it’s because we care about your daughter. We wouldn’t know if she got lost on the way or she’s sick. And we care if something is going on at home–we care about you. She said, ‘Father, I gotta tell you: no school has ever talked to me about these things before. As a matter of fact, a lot of them didn’t bother about taking attendance.'”

In Oklahoma, Bill Price, chairman of the feasibility study team for the new school, said that parents were “literally begging us to bring this school to Oklahoma City. They understand how successful this model is and what it can do for their children and their future.”

Judy Love, co-founder of Love’s Travel Stops and Country Stores and the honorary chairwoman of the fundraising steering committee for Cristo Rey, remarked, “The Oklahoma City community has once again proven their generosity and commitment to bettering the lives of others. This school will positively affect so many lives by providing the opportunity for students to reach their full potential while exposing them to professional careers.”