A Catholic. A Hero. A Kansan. 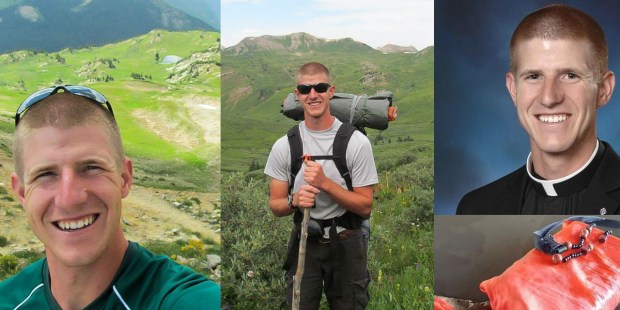 The late seminarian Brian Bergkamp, fruit of an American Galilee

I was honored to be able to help his friends and family tell the story of Brian Bergkamp, the seminarian from the Wichita, Kansas, diocese who died saving a woman from drowning.

The National Catholic Register kindly let me write long but I still had to leave a lot out. One angle I wanted to explore is the mostly untold story of Kansas Catholicism.

This is true of the Midwest in general, but is especially true of Kansas:  CARA ranks the state first in the nation in Mass attendance.

And it goes beyond Mass attendance. Go 55 miles from Bergkamp’s hometown in one direction, and you will find the Lyons, Kansas, memorial of Father Juan de Padilla, the first Christian martyr in the United States, killed by Native Americans in 1542, a century before the deaths of St. Isaac Jogues and companions in New York.

Go 66 miles in another direction and you find the Pilsen, Kansas, birthplace of Father Emil Kapaun, who was awarded the Medal of Honor posthumously for his astonishing bravery in the Korean War.

What is “Kansan” about this commitment to the faith?

Brian’s brother, Andrew, a transitional deacon who is himself finishing seminary, called their Kansan Catholic community “very personal, practical. One can rely on others in times of need. There is an unspoken bond we all share given our common faith.”

The family didn’t have “sensational stories” about Brian’s childhood, said his mom. But what what she did share amounted to a beautiful portrait of rural life.

“Summer wheat harvest, when Brian and his siblings were younger, provides some of the best memories,” she said. “Sharing truck, tractor and combine rides, staying up late, sometimes sleeping in a friend’s camper, and getting to drink Diet Pepsi — we didn’t usually buy soda for ordinary use.”

“We worked together and played together,” she said, and described Brian and his siblings “sledding on the snow-covered wheat fields in the winter.”

How does all of that add up to faith?

“With our background in farming,” she said, “it’s kind of easy for us to understand the parables in the Bible.”

I like that. It makes Kansas something like America’s Galilee: A simple place from whence not much is expected, and therefore a place where God can do great things.

Where would you expect great Christian fruits to come from, if not a state that is simultaneously No. 1 in Mass attendance and No. 50 in tourism?

I write this from Benedictine College, which produced Kansas-born Bishop Brungardt of Dodge City, along with six other 21st century bishops — some of whom, I’ll grant you, only spent four years in Kansas.

But surely that counts? Universities are where you change the world. Bishop Andrew Cozzens left Atchison, Kansas, and helped found St. Paul’s Outreach. That is one of the nation’s leading Catholic higher education outreach organizations, along with the Fellowship of Catholic University Students (FOCUS) which, as it happens, began in Kansas, at Benedictine College.

Many 21st century religious vocations started at the college, and so did several vocations directors — of both religious sisters and diocesan priests. The local high school in Atchison is run by a co-founder of Lifeteen and has two alums currently in seminary.

One of those two would credit the excellent St. Lawrence Center at the University of Kansas with his vocation. The other would credit Wichita. “Wichita guys who taught here were great examples, and they were good about gathering groups of guys together who are serious about their faith.”

The Wichita diocese, which ordained 10 in May, is consistently in the top 10 nationwide for most vocations per Catholic, in large part because of their outreach to youth — and also because of something else.

Teresa Bergkamp, who sent two sons to seminary, credited her diocese. “Wichita has a lot of Eucharistic adoration,” she said. She is right.

The site RealPresence.org lists 12 Perpetual Eucharistic Adoration Chapels serving the 3 million Catholics in Massachusetts. For the approximately 436,000 Catholics in Kansas, it lists almost four times that many.

When Simcha Fisher shared her love for Totus Tuus, a children’s program that began in Wichita, Kansas, I commented on Facebook “Kansas Catholicism is changing the world!”