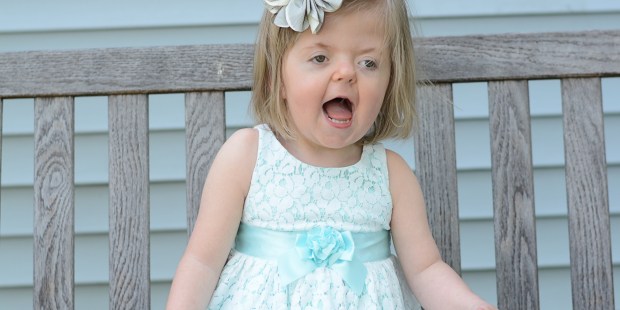 An interview with author Jeannie Ewing, who advocates for her daughter Sarah during Craniofacial Acceptance Month

“Beyond the face is a heart” states the motto of Craniofacial Acceptance Month, celebrated every September for the past 11 years. Author Jeannie Ewing is striving to spread the word about children struggling with facial abnormalities, like her daughter Sarah.

Sarah was born in 2013 with a rare genetic disorder called Apert Syndrome. The disorder gave Sarah “buggy eyes, a protruding forehead, and fused fingers and toes,” Jeannie described in an earlier article for Aleteia.

Sarah’s birth marked such a major turning point in Jeannie’s life that she had to put pen to paper to record all of the lessons she learned about grief, acceptance, and the ability to find joy even while steeped in sorrow. Earlier this year, Sophia Institute Press released Jeannie’s book entitled From Grief to Grace: The Journey from Tragedy to Triumph.

Aleteia spoke to Jeannie about her daughter, her writing, and her important work with the National Catholic Partnership on Disability.

Aleteia: Your book, From Grief to Grace, was partly inspired by your daughter Sarah. Please share with us how her birth affected you.

Ewing: Sarah’s birth was a total shock and surprise. It was a shock, because all of my ultrasounds and check-ups during pregnancy were completely normal. Once she was born, we discovered that she had fused fingers, toes, and cranial plates. Her eyes were buggy and forehead protruding. Her little hands looked like mittens, with the skin covering all of the fingers.

We weren’t sure what was “wrong” with her — and I put this in quotes, because Sarah is actually “fearfully and wonderfully made,” but by medical standards, she wasn’t typical. Upon receiving the diagnosis of Apert Syndrome, my husband, Ben, and I realized that no statistics existed about mortality rates or about life expectancy for children with this disorder. There was nothing.

This taught me a great lesson about radical trust in God’s divine providence, a concept I had embraced but never truly lived until Sarah was born. I learned to stop trying to control my life and instead to surrender it to God, living in the present moment. Because we don’t know how long we will have Sarah, I appreciate each day we have with her. This is a spiritual principle I have tried to carry over into every aspect of my life.

How is Sarah now?

Sarah is a little over three years old and has had six surgeries to date. She needs over a dozen specialists, including physical and occupational therapists, craniofacial, neuro- and orthopedic surgeons, a cardiologist, an audiologist, and an ophthalmologist. Our life consists of driving long distances to these appointments, because we want to be proactive in her care. It’s common for people with Apert Syndrome to develop unexpected intracranial pressure or fluid, so that needs to be monitored via 3D CT scan every six to 12 months.

Otherwise, Sarah is not cognitively impaired, which is a minor miracle for her condition. She doesn’t need speech therapy, and she is a happy little preschooler who embraces each day with laughter and joy.

How did your brother’s struggles with mental illness and substance addiction shape your perspective on grief?

Growing up in a household where mental illness was prevalent, I didn’t define the sorrow I experienced as grief. But looking in retrospect, it’s clear that my younger brother’s struggles paved the way for my understanding of grief. As a child, he was diagnosed with Obsessive Compulsive Disorder, then Bipolar Disorder in adolescence, and has since struggled with various substance abuse problems. The pain of watching him suffer gave me a greater empathy for the human condition.

At a young age, I cared about what people went through when others sort of scoffed or ignored people’s problems. I asked them with genuine concern, and I believe it’s because I was exposed to a very raw and real form of grief through my brother’s struggles. This was a large part of why I chose the field of counseling as an adult.

What’s next for you?

In April, I joined the National Catholic Partnership on Disability’s Council for Intellectual and Developmental Disabilities. NCPD works very closely with the U.S. Conference of Catholic Bishops to develop language and terminology for those who have been diagnosed with disabilities. They also work with the Vatican and often attend international symposiums on disability awareness and education. Through NCPD, I have a voice on behalf of my daughter — to offer perspective and bring awareness to my community about more loving ways to embrace those with disabilities.

In addition to this work, my husband Ben and I are collaborating on a book about parenting. I’m also working on a devotional specifically for people who are lost, lonely, brokenhearted, and weary from life’s trials. That’s enough to keep me busy for now!